When someone asks you to if you want build a trebuchet, catapult or any other device medieval-era construction project potentially featured on mythbusters, there’s only one acceptable answer.

So a couple years ago, an insane genius in the form of one Alan Vance came up to me and said, “Dude, I’m thinking about building a trebuchet for the New Years party at the ranch – are you interested?”

The response was an emphatic hells yes. The idea was to use a pile of half rotten logs (picking out the good ones), re-bar as joiners and other spare construction materials to cobble together something capable of throwing your basic array of fruits and vegetables.

Using a chainsaw, guesswork, and an assortment of power-tools used in a fashion that would make mothers everywhere cringe, we created the chaos to your right. I really believe that if we’d had a little more time and some better wood, we could have easily chucked a Volkswagen. The counter-weight was planned to be about 300 pounds, and was later ball-parked at closer to 750 pounds. The throwing arm checked in at about 10 feet in length, and climbing rope (borrowed from a local aerial dance production company) was used to provide lateral stability during hurling operations.

Over the course of two days, more than two dozen objects (all either bio-degradable, or later retrieved) were chucked, including pumpkins, sacks of flour and, of course, a stuffed cow, in homage to Monty Python. By the end of the second day, stress cracks were appearing in the uprights and the throwing arm was starting to twist in an alarming manner. The noble beast was retired via chainsaw mere weeks after her first hurl. 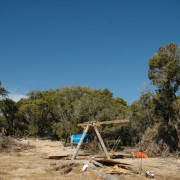 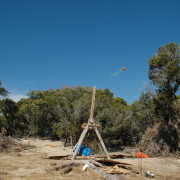 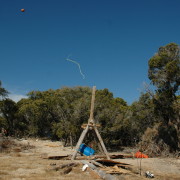 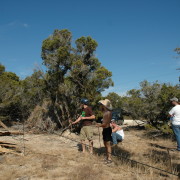 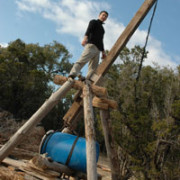 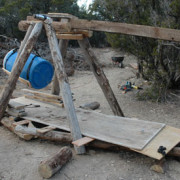