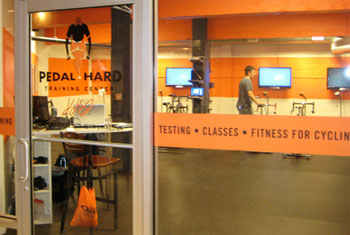 As we know I have a certain fondness for bikes, video games, computers, and gadgets in general. So when Jeremy presented me with opportunity to try all those things at once my head metaphorically exploded and sprayed thinking-organs all over the keyboard. After I collected myself, I made my way to Mellow Johnny’s – Lance Armstrong’s fancy fancy bike shop downtown. It’s a cool shop, but as a general rule, I don’t like paying for real-estate (their downtown location) when I buy bike parts.

That said, the place is sexy. The merchandise is top-notch and there’s tour paraphernalia every where you look. Want to see a Time Trial bike from the 2004 Discovery team? Yeah it’s over there by the bathrooms. Wild.

So we meet at this paragon of sport after work to try out the newest gimmick – The uninspiringly named Pedal Hard Computrainers, a wild, previously mentioned combination of video game and bicycle with so much data getting spit out it’ll make your head spin. You start out, your bike in a trainer facing a 40″ television. As you move through the course on the screen the resistance increases or decreases according to the inclines that the computerized version of you is traversing. At the same time you have a coach, who’s finished the Tour de France six times (about 13,000 miles worth of riding) telling you where your heart-rate, cadence, power output and speed should be. Essentially they take something a simple as a trainer ride (which I usually use as a good time to catch up o the Daily Show) and make it into the cycling equivalent of the Normandy invasions.

But it’s damned effective. I’ve never had a ride that whooped my ass in quite that bold a fashion. It’s $30 a session, but in education alone, it’s definitely worth it. Now I just need to knock off a 7/11 to afford my own.