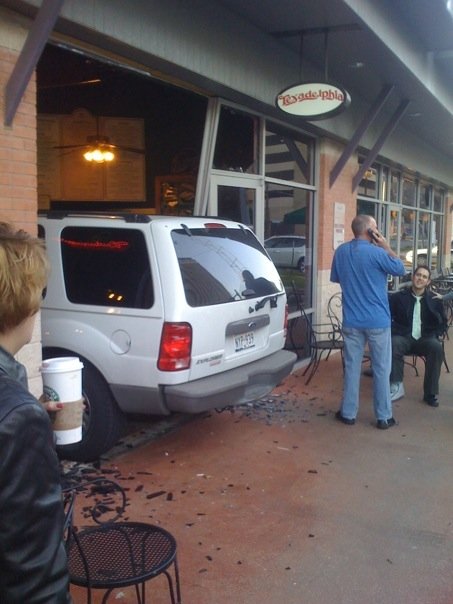 I was dropping off some cleaning this morning at the Comet Cleaners on 15th and Guad. In the process I ran into a former co-worker as I was getting some coffee, which distracted me from my initial goal of getting some tacos at the Texadelphia next door.

We were walking out to our cars and suddenly I hear this big crash, as a Ford Explorer decided to use the Texadelphia as a covered parking spot. Apparently the guy was driving with one of those AirCasts on and got his foot stuck. I was one of the first people in the shop, but I was very disappointing in myself for the lack of  witty banter as we checked everything out – I mean this guy just used used a cheese steak shop as a garage, and i couldn’t think of a single cheese-related pun? Weaksauce. Apparently I’ll never be an action hero.

Everyone was fine, but it’s a damn good thing I didn’t stop in there for breakfast as planned. Had I been in there or been walking by when it happened, we could have become a very permanent fixture at a very marginal sandwich shop.