I have relationship with lightning that could be characterized as decidedly unfriendly.

To be fair i think that most living, breathing creatures that want to remain in the practice of inhaling and exhaling, are not really too cool with bolts of electricity shooting from the sky. But it really seems to have it in for me personally and my dad as well, by association, I suppose. The reason being, lightning – and really the whole New Mexican system of monsooning afternoon thunderstorms – is out to thwart us. I have been rained on, snowed on, pummeled with hail (thank god for bike helmets), and oh yeah, I’ve gotten that little tickling feeling while standing on the side of the highest point in the state, 500 feet from the top, as all the hairs on the back of my neck went vertical – that special sensation to let you know that Zeus is taking aim (we tactically-withdrew, booked it, scampered, retreated, fled, monty-python-ran-away (take your pick) that particular time). 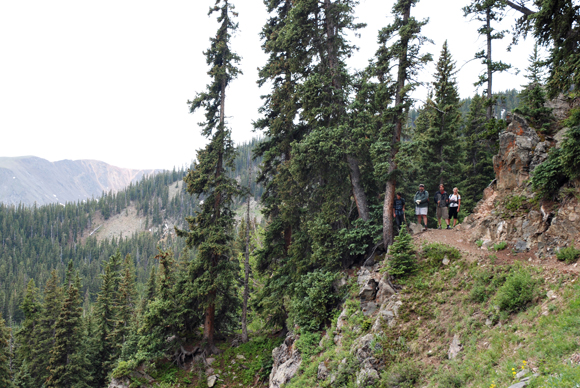 Smote by the weather gods – a series of abortive hikes that my dad and I have attempted, and for the past four years been turned back from our destination. 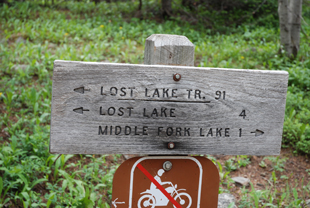 This year, though we finally made it to Lost Lake, a spot I hadn’t been since i was at least 14-years-old. As hikes go it’s kind of a classic – rockslides, switchbacks and of course, kick-ass views. And the best part – thunderstorm free for once. We didn’t go all he way to Wheeler, the aforementioned highest point, but we’ll chalk it up to a scouting mission for next year, maybe an overnight excursion – it’d be pretty amazing to watch the sun come up over that lake.

The other bit of epicness on this trip was, of course the South Boundary. 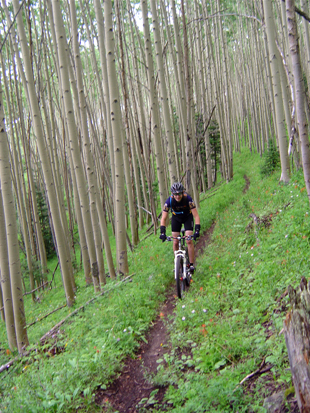 First, talk some friends into making the 12 hour drive from Austin, so you have good comapny. Do a pre-ride – you’re going to need some acclimation. Then get out of the shuttle bus in Anglefire, after driving up a forest road most 2-wheel drive vehicles would find ludicrous. Bid goodbye to the shockingly cool shop-owner/driver, and godspeed to the poor bastards that just flew in from Boston and San Francisco the previous night, and are getting ready to tackle 25 miles on platform pedals (we’re pretty sure they’re still trying to find their way back to town). Hit the uber-classic New Mexico Trail. Pop it down into the granny gear, and get ready to suffer for the next 45 minutes as you climb up to 10,800. God put lots of nice things up at this altitude – trees, views, mountains, cows – he/she neglected the whole Oxygen thing. But suffer through for a bit and you get to the sweetest singletrack I’ve ever seen – rocketing down to Taos through aspen groves, on tacky soil, and beautiful views on either side. Roll triumphantly into town, say hi To Rey at Gearing Up Cycles (thank him for the ride) and go next door to Eske’s and get yourself a Fatty Burrito.

To the uninitiated, the Fatty is alarming. Take your standard burrito format, do the meat and the beans thing, but hold on, just back the hell up, we’re about to rock your world – we’re going to put mashed potatoes in this thing. Then we’re going to cover it with green chili stew and Feta cheese. Whoa, yeah that’s right – your mind is officially blown. Throw in some micro-brewed beer and a sunny afternoon on their back patio, and you’ve got yourself a damn-near perfect day in Taos.

Although, as a rule, I’d recommend you eat said burrito after the ride and not before, as…complications…can arise.