Apparently, the hardest part for me about the Livestrong ride is getting up so damn early. 4:30am is not prime-time-wade-time. But just the same, Sunday morning at 5am I find myself hanging out at the intersection of 5th and Red River, with a couple of meth-heads and one dude who swears he just needs a couple bucks for gas. Good and interesting times, particularly given my lack of coffee. I figure if i stay on my bike, even really fast cracked-out bums will have a hard time catching me. I meet up with the Ridges (the whole point of being down there in the first place), and we load the bikes and take off for Dripping Springs. 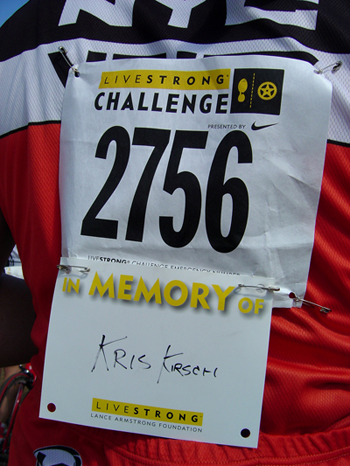 The Livestrong ride unleashes about 3,000 riders onto the hills near Dripping Springs. Everybody from pro cyclists like Lance to folks who’ve never touched a bike before, so it’s worth a lot of misery, including being chased around downtown by homeless people. This is the second year I’ve done this ride – last year’s was more about facing down a big challenge like a 100 miles on a bike, than about the actual cause. This years was different, as previously mentioned. Does pushing a bike around central Texas for 5 hours, bring anybody back, or make you empathize with their suffering. Not at all. But it’s one of those primal acts of effort and endurance that just might make you come to terms with grief a little bit more. A cathartic act of physical exertion the ends with some acceptance and some hope.

Grander philosophies aside, the ride is awesome. We’re old, so we checked in for the 65-miler as opposed to 100 this year. It’s an interesting mix of beautiful sweeping roads, and incredibly bad pavement. TxDOT, in their desire to pave every last scrap of Texas, neglected to take into account the size of the state and so has only been able to slap a thin smear of asphalt on some of these roads since the were cut through in the late 40’s.

Nerve damage in my wrist aside, we survived. Towards the end, Brian and I got separated from Jeremy and Steph and inexplicably tried to sprint the last five miles or so, I guess to catch up with them (or maybe just to be done). While it was fun passing everybody, it has also led to me taking the elevator at work, and having to stop about halfway up the steps to my apartment for a quick breather. Maybe not the best plan on our part.

Most importantly the ride raised $3.6 million for LAF’s efforts. Not a bad use of a sunday afternoon. Thank you so much to all of you that contributed to my fundraising effort. It was greatly appreciated and exceeded my expectations.

Pictures from the ride (which, yes is very unsafe)