Building a new home for the National Domestic Violence Hotline

I’d had a vision for about five years of what the Hotline could and should be – a data driven organization that makes informed decisions based on service and service-provider data. Set aside channel growth (for a moment) – moving further into chat or expanded digital, or even social engagement of our callers – without fully understanding our data, we would be flying blind. The deployment of Salesforce in the call center was a huge first step, but there was still a critical element holding us back from a technology and data (and even growth) perspective: our building.

To call the Hotline’s home of twenty years class-D commercial real estate would be a compliment. Originally a small church, the two-story facility in west Austin (Bee Caves to be precise), the building had been hacked up, sub-divided, and generally mangled into a colossal mess of overlapping HVAC zones, weirdly shaped offices and a tangle of Cat-5 wiring with no logic or reason (much less a termination diagram). Added to the demands, was a massively increased hotline staff, in a facility poorly equipped to handle such growth – it only got put on to the city sewer system in 2010. It was time to go.

In late 2015, we began finalizing plans for a 20,000 square-foot, brand new facility and broke ground on new construction soon after. I was heavily involved with both the architecture and the build teams through the entire process, working to ensure that the technical needs of the organization would be appropriately accommodated.

Also known as the wettest fall in Central Texas in 30 years.

The overall design of the building was primarily an open office space on the perimeter of the structure with direct exposure to the window line with an office and mechanical core making up the central stack of the building. Given the 24-hour nature of the program, the inherent security risk in the work being done, and the propensity of Central Texas to flood in unexpected, random places, the call center was planned for the entirety of the second floor with operational continuity and safety being the primary design focus. The views were also quite nice – being adjacent to a cemetery filled with hundred-year-old oak trees made for a pleasant working environment as well as quiet neighbors.

In addition to the technological and physical improvements, an extensive suite of wellness spaces was programed into the building. This was a critical missing element of the prior faciality – providing hotline advocates a place to process the complex and emotionally taxing calls and contacts. These spaces were initially designed and programmed into the building, focusing on activities such as meditation, yoga, and even a video gaming room. A massive centralized break room was built out on the second floor to provide easy access for floor staff on lunch breaks. 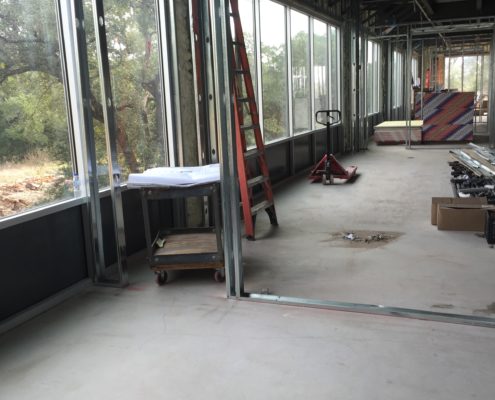 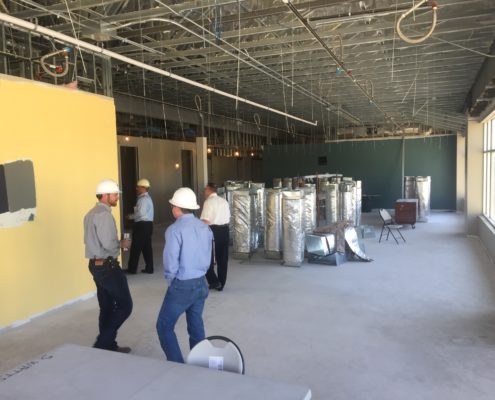 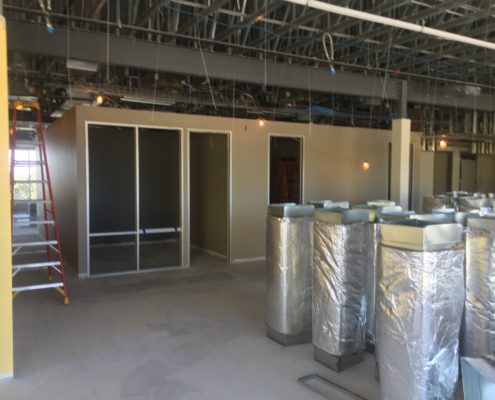 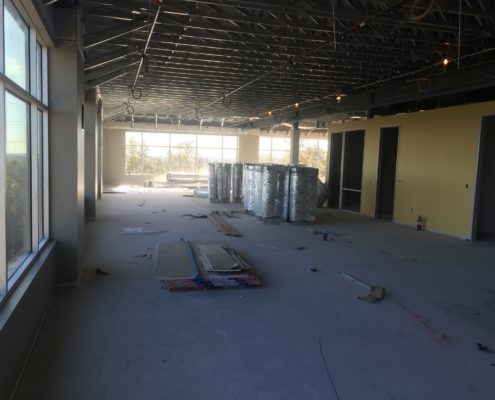 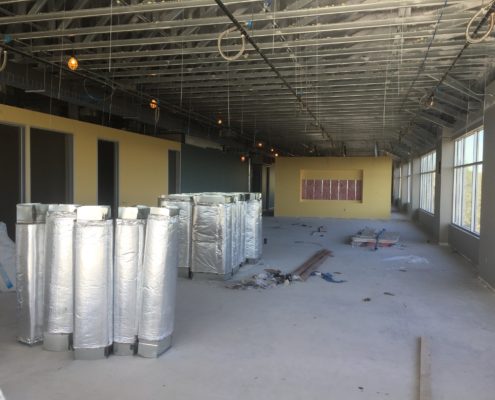 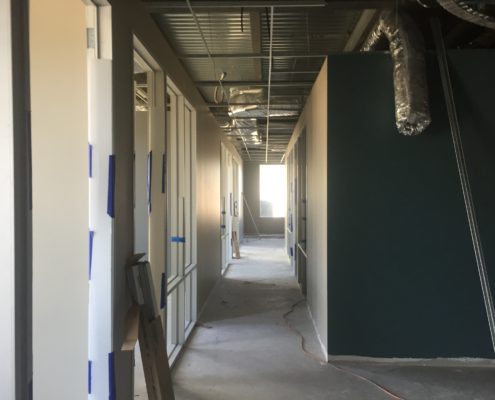 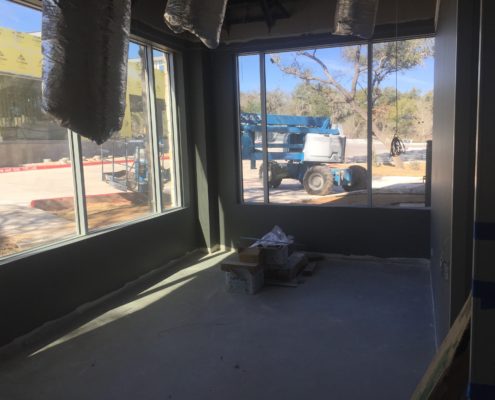 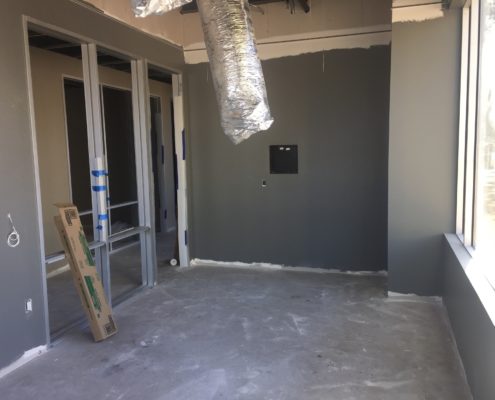 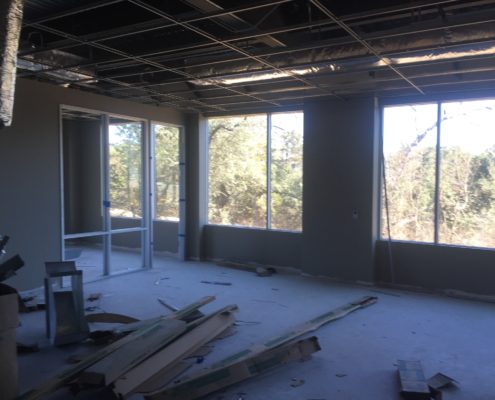 Upgrades twelve years in the making.

The focus of my team, outside of assisting on the buildout, was primarily supporting the technology and infrastructure in building.

Our key areas were as follows:

Implementing a new phone system: The new building allowed us to move forward on a brand-new phone system, with a future state designed to integrate with both our Salesforce instance as well as our critical data infrastructure and planned multi-site operations. This was by far the most critical piece of infrastructure and the heaviest lift executed in the project, requiring extensive technology, change management and training strategies to employed.

A completely rebuilt domain controller environment: We took the opportunity to rebuild the hotline’s primary information infrastructure, with extensive assistance form a local technology consulting firm – Sidebar Technology. While this was a heavy lift, it allowed us to implement new server metal, as well as scrub out many legacy problems within our architecture.

Redundant internet and Telecom connections: A key criticality of the organization is uptime for both digital and phone services. As such, our team architected fail-over functionality for both the phone and data systems on segregated inbound trunks

New fleet: After evaluating the existing hardware deployment, the decision was made to leave behind all but the most recently purchased hardware. This required our team to stand up and entirely new mixed environment (PC and Mac) to the tune of over 150 individual machines. With the goal of providing a new or recently refreshed machine to every staff on opening day.

Support for multisite operations: The initial roadmap for the building called for sites to operate in Austin, DC and Oklahoma, with the option to fail-over in an outage or disaster situation.

Screens: a network of informational screens was setup around the building. Using an internal webserver and mini-pcs the team configured and deployed a multi-system slide show that cycled through basic operational information, the current call center status as well as announcements and other informational services. This was all developed by me in my spare time.

Cabling and Setup:  As mentioned, there was effectively no organized cabling infrastructure available in our old faciality, often requiring a hunt-and-peck approaching to tracking down cable issues. Similarly, no cohesive wifi network was setup thought out the building – staff was forced to rely on adhoc non-commercial grade routers. The new facility allowed us to configure for the first time an enterprise level wifi network, with extensive cable management and robust labeling and for the first time in our history, a comprehensive wiring diagram. 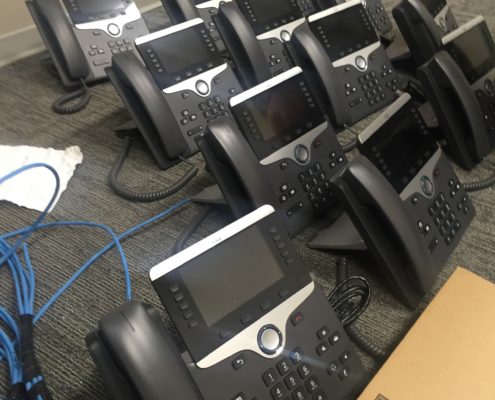 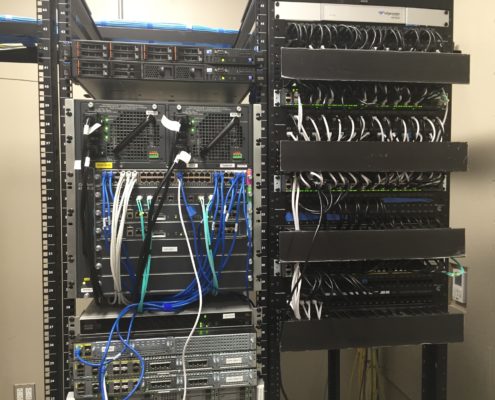 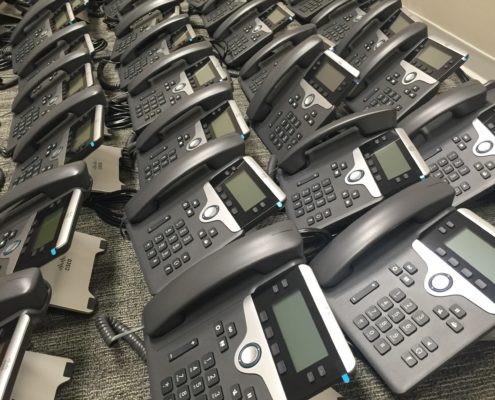 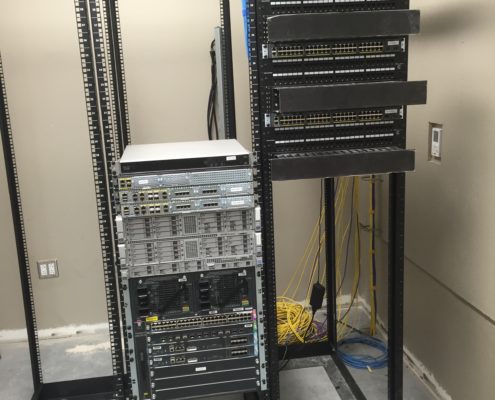 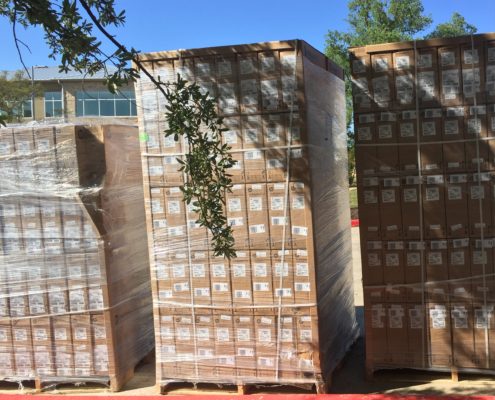 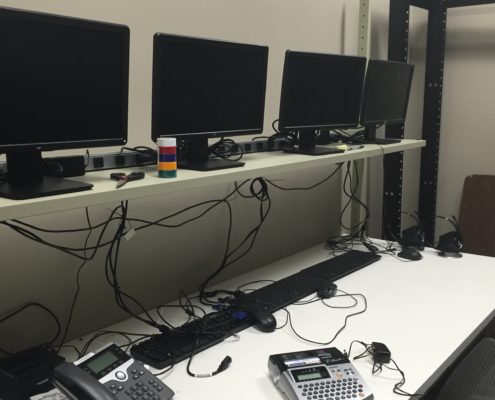 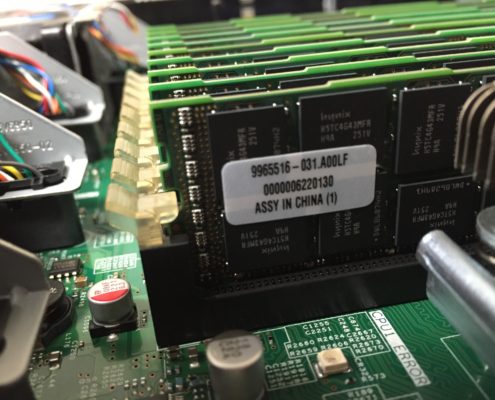 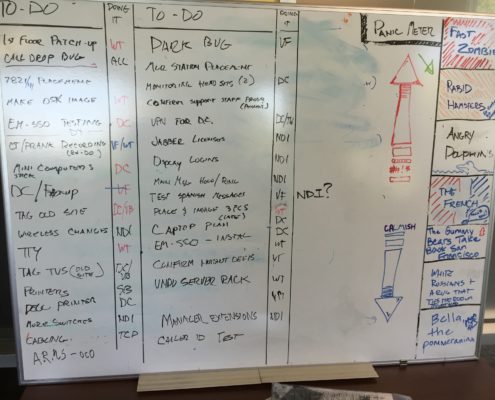 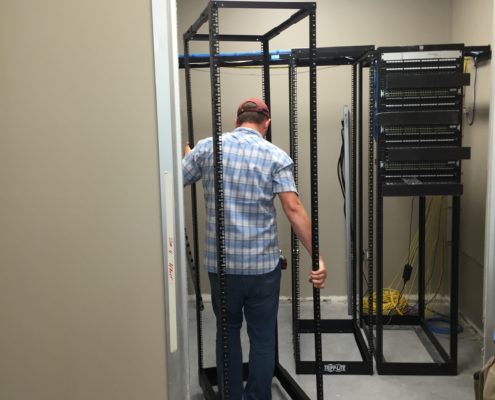 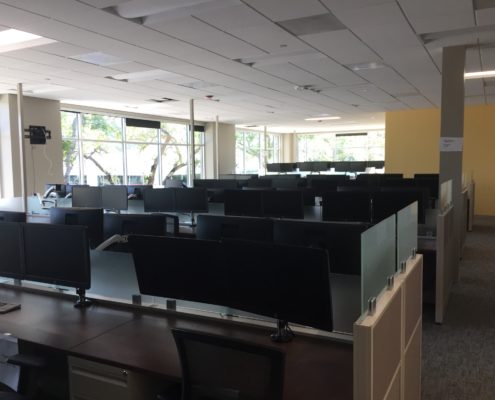 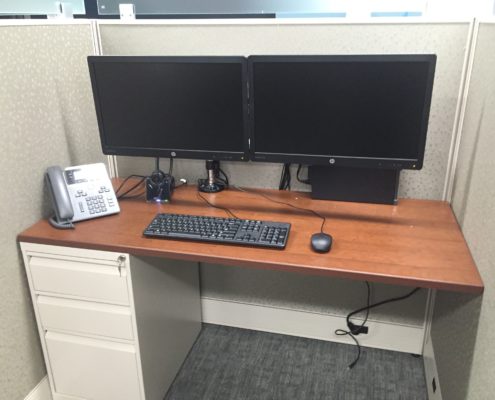 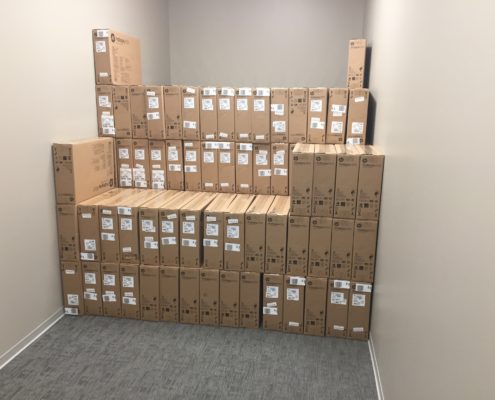 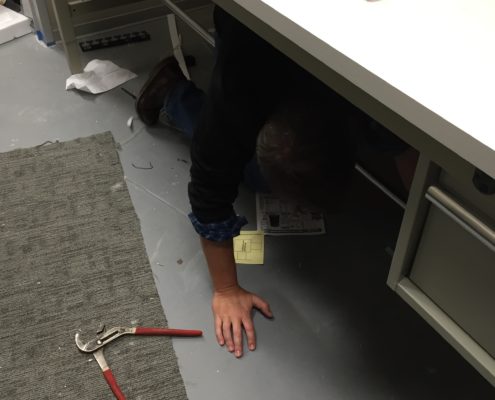 In which we pray to whatever gods we believe in.

The launch day for the new building culminated about six-weeks of nonstop work, some tricky timing in regard to a functioning elevator and a certificate of occupancy, two small sewer issues and no small amount of heavy lifting on the part of my small but mighty IT team. The true test was that first phone call. Countless hours of prep, some innovative McGyvering and no small amount of lost sleep resulted in a seamless cutover. The last call hit our building in Bee Caves at 3:59 am the first call to the new site ported over at 4am.

The work continued of course, and there were various hiccups along the way as we learned the ins-and outs of new systems and strategies. About four months after the move, I resigned from the Hotline after 12 years in my role to move on to a new opportunity in Colorado. The new building, and executing the move, was one of the most challenging projects I’ve faced, and one that I believe will have a lasting impact on the future of the organization. 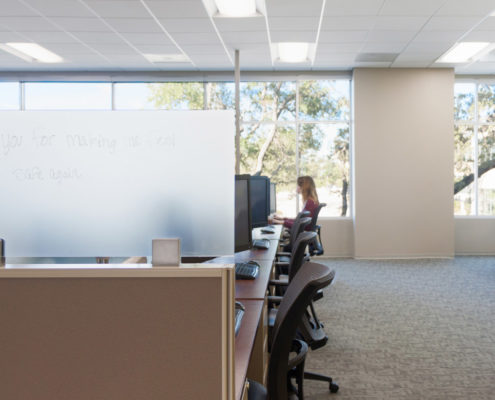 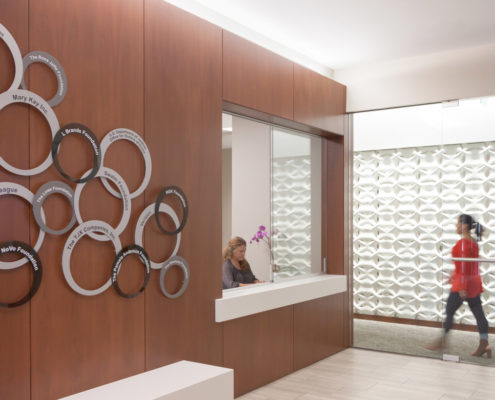 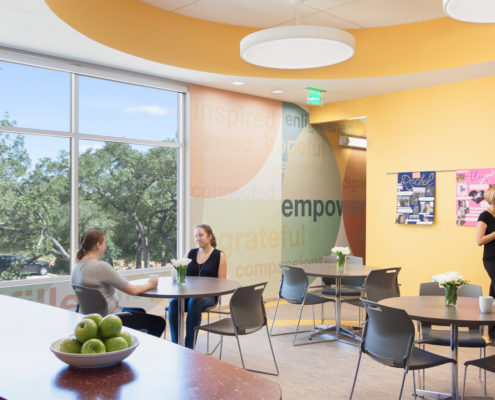 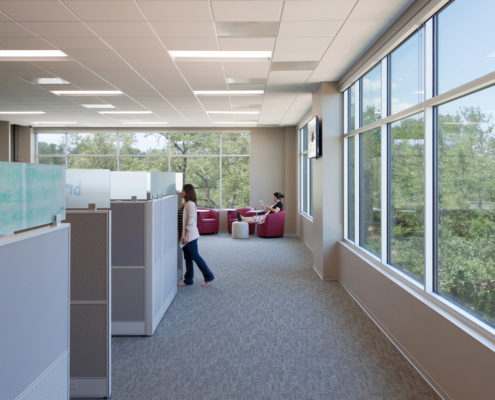 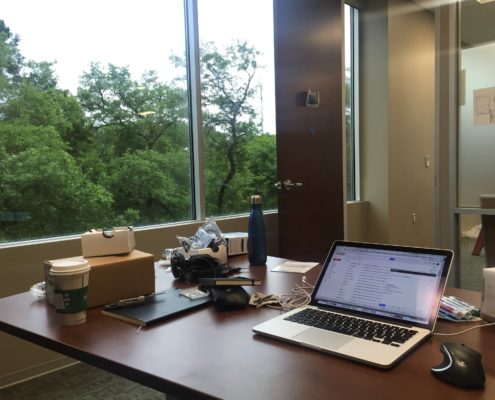 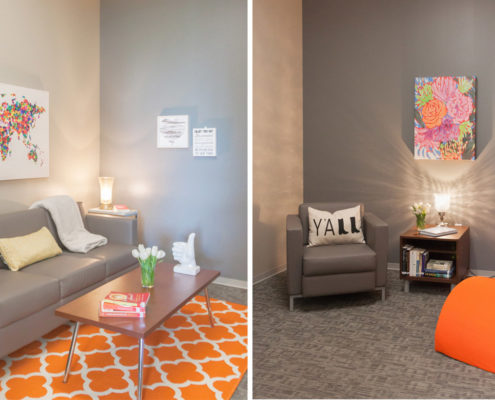 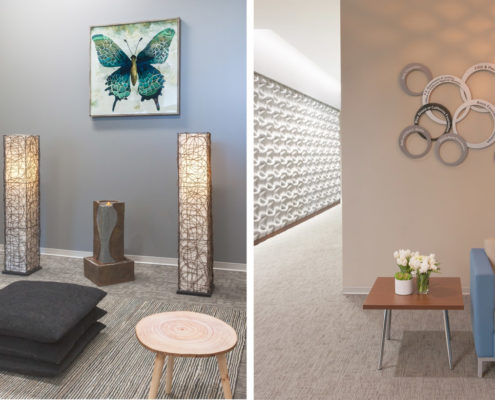