This project details the results of usability testing conducted on specific tasks in The National Domestic Violence Hotline’s (NDVH) caller intake system, commonly referred to as the Caller App. The goals of the usability testing included establishing a baseline of user performance, establishing and validating user performance measures, and identifying navigation concerns to be addressed in order to improve the efficiency, productivity, and end-user satisfaction of NDVH staff.

The usability test objectives were as follows:

The Caller App is a deployment of the Salesforce Service Cloud and is used primarily by NDVH call center agents (referred to internally as Advocates) for intake of basic information from callers, and to match callers to appropriate local resources. NDVH uses this software to provide services to approximately 30,000 callers a month, with 20% of those contacts being facilitated via digital channels and the balance coming through traditional phone lines. Following the initial deployment of the software in April 2015, NDVH management received many complaints from staff having trouble adapting to the new system. Subsequently, management undertook a process of updates to improve the usability of the system, and to establish a user feedback channel, in order to allow management to more easily identify additional necessary changes to both the usability and back-end data structure.

Advocates were initially surveyed to solicit feedback on the current system, prior to suggesting changes or updates. This survey process provided valuable insights for the Technology team managing the update process, allowing the team to focus on target areas of the system, including the filtering mechanisms and map deployment. As such the team was able to develop an Axure prototype that allowed the team to test the planned updates.

Following the survey, a test pool was created, including seven advocates from both chat and phone service provisions, for a convenience sample. Each participant completed one session (not in excess of one hour in length), on October 15. One team member facilitated the test and simultaneously took notes (in order to capture a large number of users). While participants navigated the Axure prototype Caller App they were asked to speak aloud as they completed the test questions. The testing activities focused on the sequence of actions to intake a caller form the Houston area, and how well they match up with ideal outcomes as designated by the team.

NDVH and many victim service providers doing similar work are uniquely challenged due to the fact that, as confidential services, they are not allowed to bring in personally Identifiable information (PII) about their callers. NDVH’s decision to utilize Salesforce as their deployment of choice required extensive customization to mask and customize data to stay within privacy guidelines. As such, focus on user testing was somewhat lacking in the initial deployment, leading to a rocky initial adoption process.

Additionally, NDVH had to move quickly to migrate off an old platform due to failing hardware. As a result, necessary back-end cleanup of the underlying data structure was not executed prior to launch. In the month following launch, NDVH issued several incremental updates to the system, while continuing to explore a more robust update that would be rolled out in the new calendar year in order to keep reporting systems in compliance.

Working with an ad-hoc team composed of Technology, Database and Program staff, as well as a contract developer, the following goals were undertaken:

The pre-survey served multiple purposes, including engaging advocates in the evaluation process, guiding the primary work of the ad-hoc group, and helping establish the parameters for the prototype focus and build-out. The survey focused on four primary areas of the software deployment:

Each question also featured an option for open response, which proved useful in designing the prototype and testing protocol. The survey was completed by 61 advocates over the course of two weeks in September.

“It’s frustrating that when you get a Victim / Survivor: Non-DV, you still have to put in the victim details/barriers to service because it’s not often applicable.”

“I have neighbors calling that really don’t know the couple and are just calling for info because he / she wants to help. Sometimes we have agencies calling us to make sure that our number is still a working number but we don’t have a way to document this properly.”

“There are some other caller types not on there. For example, a Hang-up is not a true Hang-up in some cases”

“It is frustrating when attempting to navigate a search and multiple caller needs have been identified. It would be helpful to be able to specify what needs you’re looking to match on each search.”

“It isn’t really helpful unless I am only looking for one need.”

“Caller needs filters make it easier when looking for resources. However, when looking for more than one need, Salesforce filters for each of the needs individually versus together. While individual filtering works fine, it would be nice to be able to identify one resource that offers all the caller’s needs in one place”

Using the results from this tool, the team was able to formalize a plan for realigning user interface and provide more filtering options.

Using the feedback from the survey, the team began developing a prototype in Axure that could be utilized in testing. Five primary focus areas were addressed in prototype development:

Interactions: Data from the past 6 months was used to identify gaps in data collection. Any field used inconsistently (or incorrectly) was then evaluated to determine whether whether training or technology could fix the issue.

Caller Types Adjusted: Only 14 Caller Types are represented in the prototype, as opposed to the 24 options currently available. Caller Types now accurately reflect the profiles of those who contact NDVH.

Fields and Options Updated: All fields were evaluated, but some were removed entirely from the Interaction. Additionally, some fields were rearranged to better capture caller / chatter narratives. For example, Victim Situations is now Victim Characteristics and Victim Situation.

Caller Needs: To streamline the data-input process, Caller Needs will just be a field alongside all other caller / chatter information. This change will save time and strengthen the narrative.

The prototype features representations of the proposed changes to pick lists and multi-select boxes, a map that can be collapsed, and a realistic mock-up of the revised filtering mechanisms 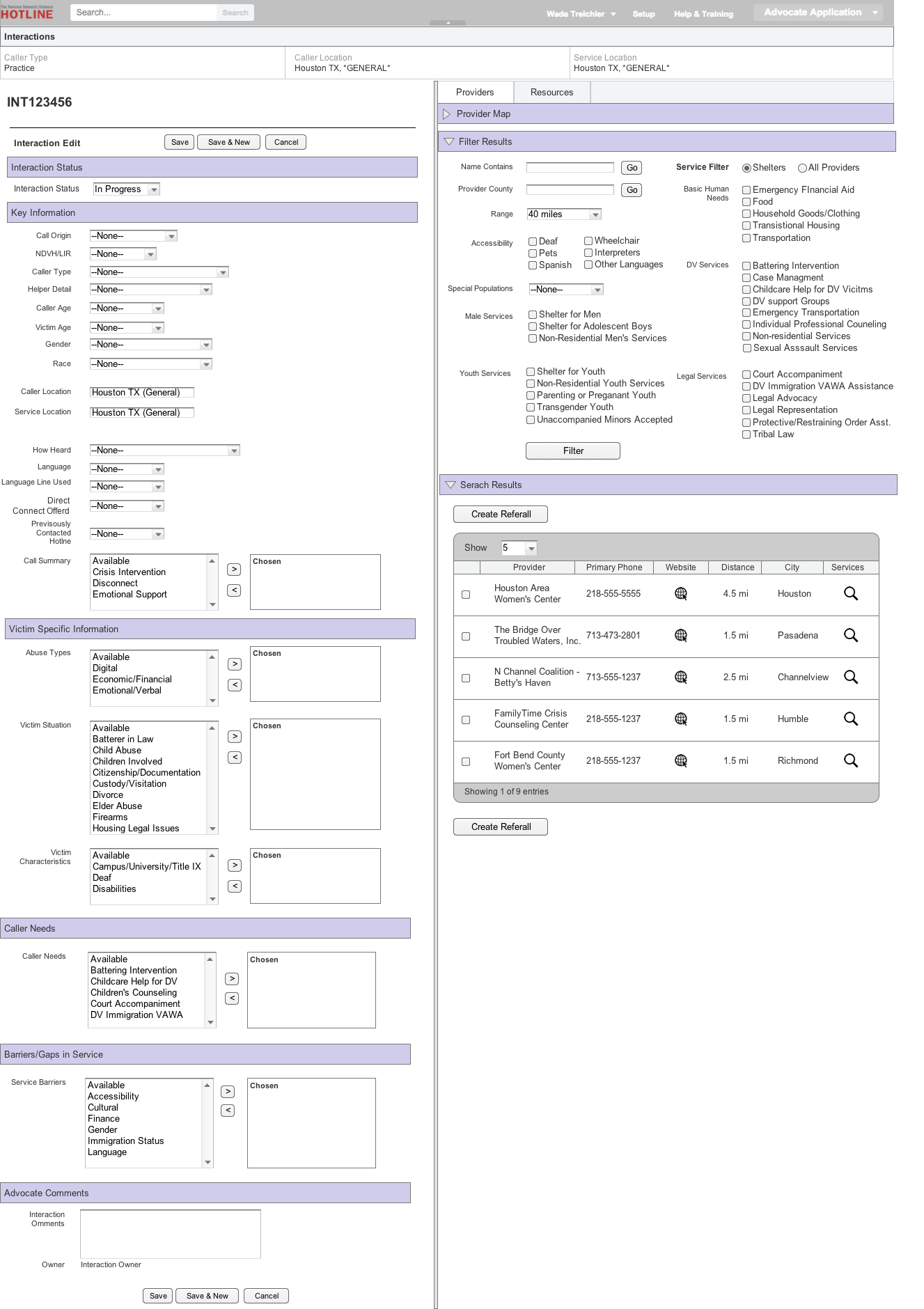 A test participant pool of seven subjects was tasked with recording an Interaction in the prototype, completing five distinct scenarios / test tasks based around a hypothetical caller form the Houston area (in order to populate the map section realistically), and were encouraged to speak aloud as they worked through each process. The test plan also included a subjective evaluation questionnaire, to be completed at the conclusion of the testing session, and captured by the tester in Survey Monkey.

For the purposes of this test, our team drew from both the survey results and informal feedback from call center managers with the goal of validating proposed changes (by utilizing the prototype) before handing the project over to the contract development team.

For the purpose of the test scenario, we asked the user to imagine they were taking a call or chat from the Houston area and to complete the following scenarios:

Task completion was measured as the ability to conclude a task without encountering a critical error. It is worth noting that task three, which had the lowest completion rate, was always tested in the same order. It was the first encounter for users with the new interface, which could point to a possible learnability issue that should be corrected in subsequent testing by randomizing task order.

The table below displays a summary of the test data. Low completion rates and satisfaction ratings, as well as high errors or longer time spent on tasks, are indicated in the table below.

Participants provided ongoing feedback as they completed each task, as well as any task completion questions that arose. Their comments, along with the task completion and errors data, form the basis for our recommendations.

Do you prefer the initial view of the map collapsed or expanded?

Open-entry feedback: Feedback supported keeping the map expanded, perhaps without the option of collapsing. One advocate expressed that she feels “more connected with the caller” when she has the location readily available, and provided very positive feedback about the map experience overall.

As compared to the current system, do you find the new filtering options to be:

Open-entry feedback: One participant expressed that titles / headers could be larger, or formatted in a way so that they’re easier to read. Another said, “Wow, that’s great” and added that the additional filtering options helped her visualize what could be offered to the caller. Other participants had positive overall reactions in terms of ease-of-use and improved filtering options.

As compared to the current system, do you find the new service provider layout to be:

Open-entry feedback: Overall feedback was positive. However, one participant said she felt it was the same usefulness as current layout.

In terms of ease-of-use, do you find the provider services layout to be:

Open-entry feedback: Feedback was very positive. One participant remarked, “This is going to be a lot more user friendly.” Another said, “You guys are doing a good job in making this [less] challenging. It’s cool, it really is awesome.”

This test plan was executed with the understanding that NDVH would pass recommended changes on a deployed system on to a Developer, and that any changes would have operational and training impact on the call center at large, including:

The severity rating below is based on two factors: impact and frequency.

Impact is the ranking of the consequences of the problem by defining the level of impact that the problem has on successful task completion. There are three levels of impact:

Frequency is the percentage of participants who experience the problem when working on a specific task:

As a testing group, NDVH Advocates found the interaction changes and information architecture updates to be a positive change in the existing deployment. Testing results indicate that NDVH should proceed with its planned changes, while also taking into account key recommendations.

From a broader perspective, trainings or the lack thereof seem to be a broader problem in the overall issue of system adoption. Across the board, advocates seemed confused regarding definitions, appropriate call-flow, and the vague purpose of the Caller Need section as a filter mechanism, as well as a narrative device for reporting purposes.

The lack of appropriate training, the mismatch of workflow with regards to actual call-flow, and the rushed adoption of a new system (due to impending hardware failure), without regard to the necessities of data integrity or cleanup, have all contributed to a less than ideal adoption path for NDVH on a system that is not only integral to operational stability, but also critical for future reporting and issue advocacy. That said, these system updates, in both interface and data structure, should improve Advocate efficiency on the front lines and improve the quality of reportable data.