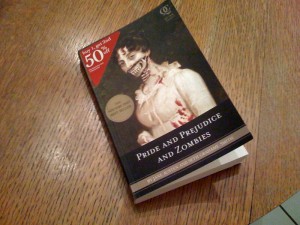 In what’s described as an “expanded edition” of Pride and Prejudice, 85 percent of the original text has been preserved but fused with  “ultraviolent zombie mayhem.” For more than 50 years, we learn, England has been overrun by zombies, prompting people like the Bennets to send their daughters away to China for training in the art of deadly combat, and prompting others, like Lady Catherine de Bourgh, to employ armies of ninjas. Added to the familiar plot turns that bring Elizabeth and Mr. Darcy together is the fact that both are highly skilled killers, gleefully slaying zombies on the way to their happy ending.

Going to go ahead and forcefully assert that my girlfriend is a whole different league of awesome for buying this.