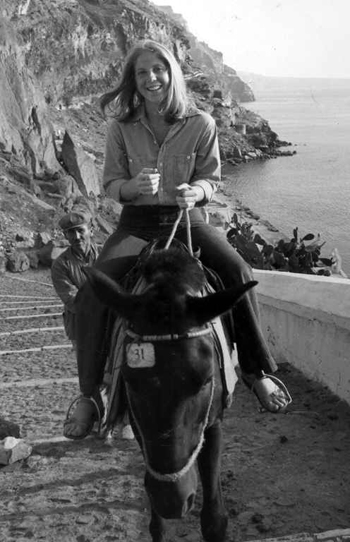 Christmas time comes around and my family cuts loose. There’s a food, drink and significant plunges into credit card debt due to totally-exorbitant and highly-detailed Christmas lists. Christmas Eve has big food items on deck, including Beef Wellington also known as steak donuts or bow-tie beef depending on whether you ask me or my sister.

We were into our third round of wine getting said dinner ready, when we got the call—that my godmother Kris hadn’t shown up for dinner with friends, and was she ok?

Kris was technically my godmother, but she’d been around since I was wee. One of those surrogate aunts you read bout in books that I was lucky enough to actually have. She was diagnosed with an aggressive  cancer when I was maybe 12, and was in remission for a long damn time. She never really talked about it, at least not to me, and I imagine if they get the internet in the afterlife, she’ll be upset with me for writing about it at all. But it happened and I hope she can forgive me.

In 2007, while I was dealing with the great-domestic-realignment, her health was also on a bit of downslide again.  At thanksgiving though, she seemed ok and we had a great meal, and some great conversations and one of the last things she said to me was, “I’m going to get better, Wade-O, I’m going to beat this thing.”

As my parents rushed over to Kris’s house on Christmas Eve, to see what was going on Kendra and I put away the food and sat and waited (we also almost inadvertently killed my moms dog, but that’s a story for later). Twenty minutes later, the helicopter roared over our house and ten minutes after that, again the thunder of  rotors. Lifeflight, the local air-ambulance. Such weird thing to think of someone you love thundering over your head at 150mph. We went to Houston that night, and tried to sing Christmas carols on the way, as I attempted to find some moderation in my driving between getting to the hospital before the helicopter and freaking out my mother. We celebrated Christmas the next day in typical Treichler fashion, with presents being opened all day, and multiple toasts with enough food to feed an aircraft carrier, because we needed it after the year our family had, and we felt that Kris, in her ever reticent manner about her illness, wouldn’t have wanted us to make a fuss.

Fast forward six months—I’m sitting at my computer at work, signing up for the Lance Armstrong Livestrong Ride this October, a quite frankly, I’m pissed as hell. I don’t understand many things about this world, one of them being why the hell haven’t we beaten this god damned disease yet? We can land on the moon, we can build a global communications network, we can crack the atom but we can’t cure cancer?  More than anything though I’m mad that I don’t get to spend Christmas with Kris this year.

So this year in the Livestrong Ride, I’m not riding for the cause, for cancer-funding legislation, or any grand philosophical ideals. I’m riding for Kris, and I hope she doesn’t mind (although she probably wouldn’t like all the attention). Hopefully, some of you kids can pitch a little money to the cause. Maybe it’ll help somebody get one more Christmas with their godmother.

I’ll be putting up a permanent link in the side bar later this week, but for now, click here.

Update: I have to say I’m a bit stunned – I didn’t expect to make my fundraising goals in one day. Thanks so much to everyone who pitched in, it means an incredible amount to me. Your generosity is awesome.