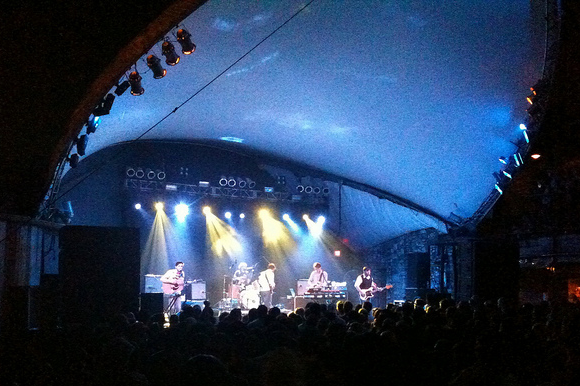 There’s something impressive about the Scottish guy on stage, sweating his ass off in the swampy-Texas-version-of-Fall, guitar slung upside down over his shoulder, pounding the crap out of a kettle drum while hundreds of fans sing along.

But let me back up.

Sometimes we get a little spoiled living here. The place is being over-run by hipsters in skinny jeans and downtown in dominated by carpet-bagging yuppies from California, staring down from their $500/sqft one-bedroom condos, complaining that we all talk funny here and that the eating melted cheeses on chips is uncivilized.

But then you get to go hang out a bar where the bartender remembers you (don’t judge), and you can eat some kickass food and have a few drinks before catching a pedicab over to a show at Stubbs to have some guys from Scotland rock your face off. And yeah it’s a Wednesday night, but this is Austin, and despite it all, we are still a kick-ass music town and Frightened Rabbit is putting on an awesome show to pretty packed house. Exhibit A: Half-way through a solo-acoustic version of Good Arms vs Bad Arms, Scott Hutchinson’s Guitar blows it’s pickup, so we’re suddenly left with only his vocals…the crowd steps up to the plate and sings along while he switches instruments, never missing a beat. In his words, “that was fucking brilliant.” Yes it was.

Before the 10:30 cutoff (thanks to the condos that went in across the street a few years ago). The band fires of a final salvo in the form of a face-melting, dance-your-ass-off-version of The Twist, then it’s time beat it back to the car.

This is not every Wednesday night. Most Wednesday’s find me yelling at a piece of code or web-bit that won’t behave, watching the Daily Show at 10 and passed out shortly there after. But we work to live in this town and this is a good place (to use a generalization), where we can have a night like this on a Wednesday, or watch 4th of July Fireworks from the Canoe, tear down some single track on the bike after work, or even just sit at Polvo’s, margarita in-hand. It’s worth the hipsters and the yuppies and working a little harder than I might otherwise.