For my Grandmother’s 90th birthday bash – being that she is was a medieval history major at Rice –  she wanted to see ancient ruins. With her initial suggestion of Syria probably out, we made do with Athens and Florence in (and I say this without hyperbole or excess) what was really a once-in-a-lifetime trip.

Starting with my sister and Jamie in Red River, for fun times that included a talent show, hail, call and respone Bohemian Rhapsody and oh, a wedding. Next up was Brad and Nikki, with The US Pro tour, foxes, bears, and a bachelor party that included a 2 mile trail run, uphill, with beer (in transit) and an ill-advised tree climb at the top.

Also, Who knew I would look so damn stunning in a bowtie.

Across the river the giant Texas flag that flies every day over the state cemetery waves lazily in a breeze I don’t feel here. My immediate audience is the lake/river blowing west and flowing east by southeast, bound for a trip over the dam and a meandering journey to the rice patties of Colorado county, maybe even all the way to Matagorda Bay and the wide brown shores of the gulf. Four points off north, one of the eastside moon towers are flicking to life, my little link to my old ‘hood in Clarksville, the last real Austin neighborhood we lived in. Far to my right, just above my Vodka Tonic, the hulking remnants of the Holly Street Power Plant sits idle,  it’s silence an invitation for developers, real estate speculators and yuppies waiting to pounce on this fertile, flat, non-environmentally-controversial piece of shoreline.  Seventy years of geo-racial division will, I’m sure,  soon be fixed by mixed-use development, condo lofts that no one who grew up here can afford and bistro restaurants who will never understand that the two key ingredients to good migas are ample grease and an abuelita with skills on a flat-top grill.

Pan left, and the bats are following the water to the rice patties, moving not in their swirling cloud as in that painfully hot part of late summer, but as solo travelers hitting the road for some dinner.

From where I sit, to either side there are people, taking the air and dogs. A quick calculation of popped collars, shitty music playing from phones and dochebag haircuts, makes me realize the dogs are supeior company, even the pomeranian, whose hair cut and goofy collar, after all is not his fault.

Really, it’s time to get to work and tick a few things off my list so that tomorrow isn’t a complete clusterfuck. The better choice it seems would be to leave the work to the bats, the river, the doochebags, and the pomeranian with the goofy dew and head back west to the mountains. Take the car, grab the lady and go bum around as the fall colors light up the hillsides, and the fade under snow. Make do. 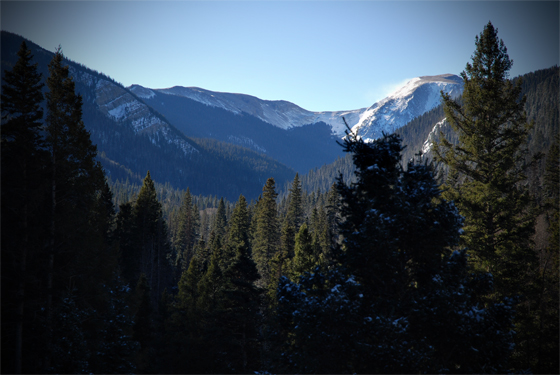 Yeah, Thanksgiving in the mountains doesn’t suck.  Photos are here… In 36 hours we hit the road for another round of work-camp at the house in New Mexico. Say a prayer for my knees and lower back. More floors, counter-top, appliance setup, door hanging, light fixture installation, and much much more. At least I’m flying this time, and be warned Southwest Airlines, I come armed with copious drink tickets.

A weekend away does you good, even if it’s only a 30-minute drive south. Discovering the world’d greatest Reuben doesn’t hurt either. 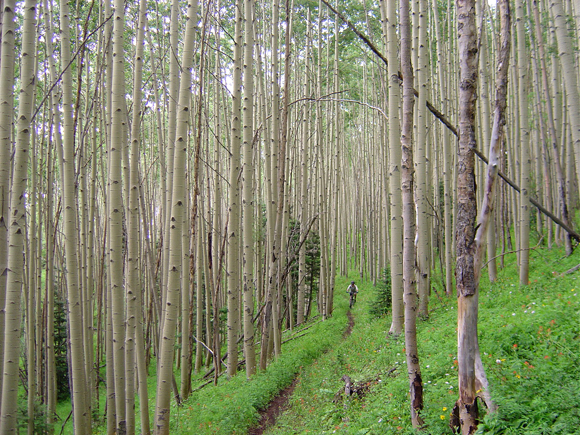 I’ve spending a lot of my summer traversing the Texas Panhandle. In two days, we’ll be initiating battle plan “dumbshit,” which involves driving for 24 hours plus in order to spend about 48 hours in New Mexico, culminating in a planned South Boundary ride (see above awesomeness) on Sunday. Fingers crossed that we’re still young enough to pull something this stupid off.

[slideshow id=1]
Two weeks, 2700 miles later we’ve landed back in Texas. I can safely say that Colorado is much further away than it looks and has significantly less oxygen than Austin. The first day out in Crested Butte after a supremely awesomely greasy breakfast and sleeping in the drivers seat the night before, jumping into interstate traffic would’ve been preferable to continuing the climb I was following Jeremy and Annie up. But here’s the deal with riding in real mountains – the suffering is directly tied to the reward. So that while i felt like i was about to vomit up both lungs (and my kidneys just for kicks), the reward side of the equation – where you get to scream down hill though beautiful groves of aspens at distinctly unsafe speeds is very much worth the pain and suffering. 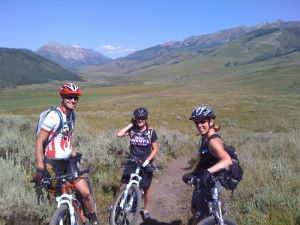 Staying with Annie was fairly awesome – I hadn’t seen her in about a million years, and she now has a beautiful family, but still found time to rage with us on the bikes. And rage we did. Strand Hill, Snodgrass, and of course the 401. What the 401 lacks in the flowy aspen groves of the South Boundary, it makes up for in sphincter-clenching exposure. This is where the Garmin unit really comes in handy, because I don’t really want to know how fast I was going until its all over with. Even the smaller rides on the lower and upper loops we did with Annie’s son (who incidentally rode down some stuff that I would not), were that pleasant mix of gut-busting difficulty, incredibly beauty and fantastic adrenaline rush that make it worth spending obscene amounts of money on a bicycle. I can safely say I didn’t really understand mountain biking until going to CB – it was one of those things like understanding sex for the first time – “oh so that’s how it’s supposed to work….hey this is pretty fun.” 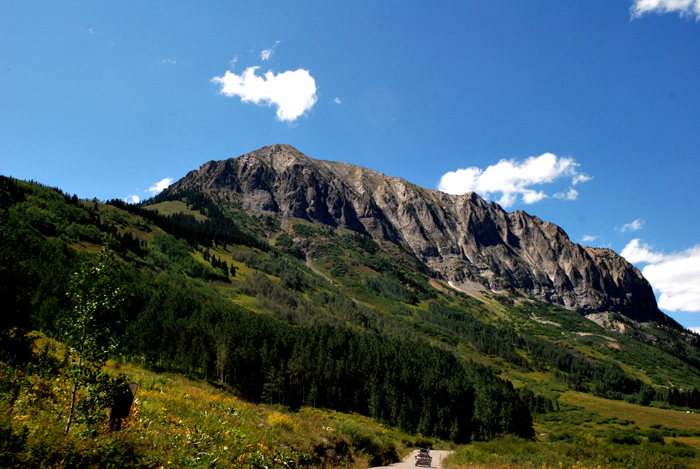 It sounds stupid, but Colorado is so different from New Mexico, where I normally spend my days out west. I know, duh, but I always find it striking. Aside from the distinct lack of turquoise and adobe it’s so different from the old world Spanish colony vibe that New Mexico gives off. It’s like they took all the people who like exercise way to much, but didn’t dig California, and shoved them into this square little state. It’s wonderful up there and I can’t wait to go back, but in the same way that overly swanky homes really freak me out, I’m not sure it’s for me. I need a little more grease and Type-II Diabetes on the periphery, otherwise my spidey-sense starts tingling.

Plus, I about froze to death on a couple of occasions. That is something I’m very much not cool with (heh). Breckenridge was fun though – we got to see Mayor Brad’s house and roll in town with him while he glad-handed and kissed babies. Seriously, this man owns this town – nothing happens in greater Summit County without the say-so of Mr. Larochele. Stoplights turn green for him as he rolls through town, and if 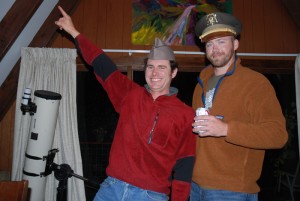 for some reason they don’t, the police spring into action to redirect traffic, uttering, “We’re sorry Mr. Larochelle…won’t happen again,” while he waves beneficently. Even the waitress at the bar didn’t want to buy a laptop she’d been considering without asking him first. We also went on a small bike ride. Our GPS differ on this, but it was somewhere in the range of 3K and 12K feet of climbing, over the course of somewhere between 16 and 300 miles, all with the busted ass linkage that I’ve mentioned previously. Gorgeous, gorgeous country though and riding with the head-honcho of a city is always a good time (rumor has it the forest service pre-rides the trails for him, and clears out anything like logs, trash or Texans, that aren’t supposed to be there).

Week two found me back at the cabin homestead for some quality time with a hammer and a ladder. Retrofitting track-lights to a ceiling with no crawl-space, while trying to be at least cognizant of building codes from this century is no small accomplishment. I pretty proud I only had one incident of arcing, and one small shock (as our electrician up there says, “no big deal man, it’s only 110 volts…”) 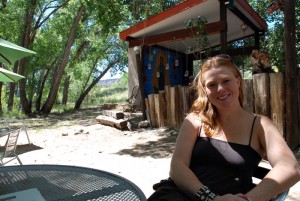 Also of note, was one of the most pleasant conference call I’ve ever had, talking to a new freelance client while sitting under a cottonwood tree just off the square in Santa Fe. This is how all business meetings in the future will be conducted if I can mange it. My ideal life would be something along the lines of Jack Kerouac for the three hottest months of the year in Austin, except with better internet access. Do a call, get a client committed, then drive up to Embudo Station for some lunch under the cottonwoods next to the Rio Grande. Spend the morning working on a site, then head out for a hike up to middle fork lake in the afternoon, then make a few calls down in town, and follow up on email at the Dairy Bar, green chili cheese burger in hand. Finish up work, and then take your girl dancing at the Motherlode Saloon?  This is a lifestyle i can get behind. 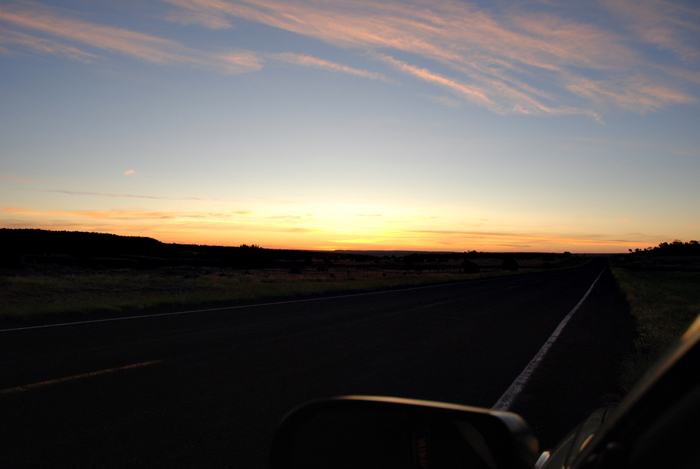 As with all good things though, there’s an expiration date, and our trip’s was August 23, as we rolled out of the driveway at 4:15 in the morning, in my always-futile race to beat the sunrise out of New Mexico (seriously, staring into a sunrise for three hours is brutal). Two weeks gone was a long time – maybe I’m not as vagabond traveler worthy as I’d like to think. I love our place, I love coming home to a clean, cool apartment, cracking open a glass of wine, and letting Jeremy kick my ass in Halo for three hours. Making dinner and watching a movie with Liz? Pretty much my favorite evening. At the same time, waking up to the sunrise, huddled under my sleeping bag in the driver seat of my car in a canyon near Gunnison….well that’s oddly awesome as well. Maybe there’s a balance, maybe one day we’ll find it. 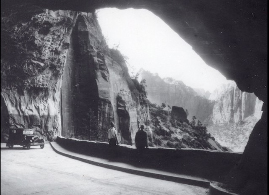 Recently-returned-from-roadtrip-wade found this to be fairly awesome.

It never happened before, and it’s not likely to happen again.

Wednesday before dusk, rangers at Zion National Park, in southern Utah, blocked all traffic on the highway that crosses the park so that 300 people holding rare and precious tickets could walk through the historic, pitch-black and narrow Zion Tunnel.