Let’s get the obvious out of the way: College Station, and the cult of Texas A&M that it houses is a weird and mysterious place. I would challenge you to find another spot in this country with as many weird, archaic and potentially psychologically damaging traditions as my Alma Mater.

Ironically on the flip-side, there’s my love/hate relationship with College football. My bias for teams has nothing to do with athleticism or skill, it’s more about history and familial heritage. Much of my family went to the University of Oklahoma. My first dog was a giant yellow lab named Sooner. Guess who i pull for when OU plays Texas. Family events, like Thanksgiving dinner, have in the past taken a back-seat to important rivalry games such as Texas v Texas A&M. Hell, my great-grandfather used to teach my mom and my aunt the ref’s hand signals in the back seat on the way to the OU games.  God, apple pie, America and OU’s 47 game-winning-streak that begun in 1953. 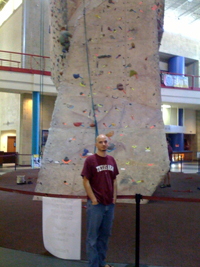 So with that both these points in mind I carefully considered Brian’s late friday offer of tickets to the A&M vs Texas Tech Game. A game at Kyle Field is an impressive display of the acoustical influence, team spirit and the power of the Aggie-brainwashing apparatus at work. But Texas Tech is also ranked fifth in the nation, and it was perfect biking weather in Austin. I passed.

B on the other hand did not and, in addition to the game got the chance to return to the mother-womb of A&M, the all-father of our college experience, the TAMU Rec center rock wall. I guessing when he and Brian burst through the front door of the rec center, with the sun at their backs, the music immediately switched to the Rocky theme, life slowed to a quarter of its normal speed, and scantily clad gym-bound co-ed’s all stopped, stared and wondered aloud – are they back? Could LaRochelle be far behind? Then Badowski pulls out his Scarpa Lightnings, puts on a harness, says, “daddy’s home,” and proceeds to climb 5.13c off the couch. (FYI – for those confused, the last sentence there is all climber speak). 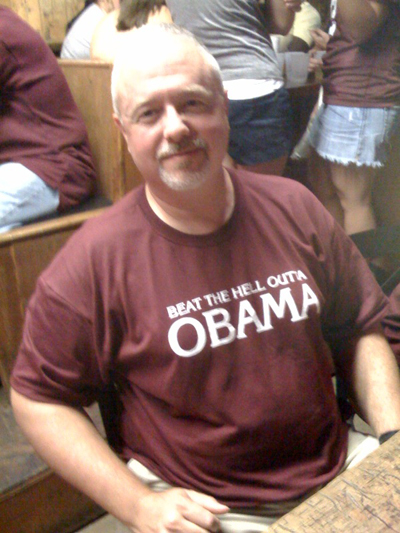 Ok, maybe that’s just how I’d like to think it happened. In reality they went and left shortly after. In reality the place is transitive an no one remembers us, except the folks that never left. I spent 90% of my time in college in four places (The rock wall, the architecture building, Dudley’s and in my car headed for Austin). The only place with physical evidence that I was ever in any of those places is my car, and its not the type of evidence you want to examine too closely. We left and moved on to make a lot of false starts at life, as people of that age seem to do, while new blood filled our vacancies.

Philosophical dribble aside, shockingly A&M lost to Tech, which gets back to my hate relationship with College football – my teams loose. Everytime. Sure, Oklahoma won a title a few years ago, but A&M is in the middle of what looks to be rebuilding decade and can barely scrape together a wining season.  Which makes me glad i didn’t go, because as it turns out,  there’s reason I only haunted a few places in college station. I submit, for your review,  this photo that Brian was kind enough to send me…

And ok lets be honest here, the beating he’s referring to in his mind probably has nothing to do with the election. That sums up college Station nicely in a nut shell – football, goofy-traditions, and dash of veiled racism. Nice. Maybe I’m not so sad about being gone after-all.

Anyhow, the hell with this, I dull roar of tailgater traffic in distance has shifted and  I can hear them firing up the game at DKR. UT may be the worst batch of fans in the NCAA, but hell, at least they might win, and damn if that McCoy kid can’t move that ball.