Jason Kottke, author of kottke.org and one of my inspiration in the late 00’s, has announced his own medium dead as of this year.

Instead of blogging, people are posting to Tumblr, tweeting, pinning things to their board, posting to Reddit, Snapchatting, updating Facebook statuses, Instagramming, and publishing on Medium. In 1997, wired teens created online diaries, and in 2004 the blog was king. Today, teens are about as likely to start a blog (over Instagramming or Snapchatting) as they are to buy a music CD. Blogs are for 40-somethings with kids.

Maybe so. And yes, the readability of personal content has plummeted in recent years, but I’m not quite willing to just cave on this just yet. Social is great – incredible even.

But it’s not yours, it’s theirs.

Facebook owns your content, your photos, your ideas. If I’m going to create something of substance, pour my soul into the a written piece, put my work out there for the world to see, why in the fuck would I give it away to another platform? Moreover (and maybe this is just my designer past talking) why would I give up control of the flanking content? Do I really want your selfie from the bar sitting next to something I’ve spent I semester toiling over ? Maybe it makes me a snob, but not really.

Narcissism is a powerful force and the broad swath of audience available on the social tubes is immense and still not fully tapped in terms of monetization. But the power of control, the ability to govern your own content AND the property, the canvas, on which it sits – to me that loss is profound.

Fun times on the line with GoDaddy yesterday as our server went offline and refused to reboot. Shockingly at about 3pm after sacrificing our entire afternoon to IT gods, I kind of lost it.

Matthew A. – Server Concierge: Is there anything else I can help you with? (third time he asked this in as many minutes)

me: no, many thanks for providing as usual, no support what so ever. as usual, godaddy continues to astound me with it’s epicly shitty customer service. The only light at the end of the tunnel on these chats is the knowledge that one day soon, I’ll be moving my servers elsewhere.

Poor guy. Probably not his fault, but wow, that’s some crap service.

They (the blog police) say never to post about how you haven’t been posting, not paying attention to your site, letting it fall in to disuse like some sad, sad Blockbuster in a strip center. Neglect, of the criminal variety so to speak.

Well shit man, I’ve been busy. We got us a merger, I’ve got me a new professional portfolio site I’m trying toget off the ground and, oh yeah I’m throwing a little party on September 10.

That said, in the next month or so we should see a return to normal, spleen venting.

Through the  years in Clarksville, while I’ve enjoyed the many other fine restaurants on West Lynn, I’d skipped you because I thought, that’s just a little to rich for my blood. Valet parking in this neighborhood? Really?  Ok whatever, I’m prejudiced, cause I can walk there and your customers always seem to be trying to kill me when I’m on my bike.

However last night, Groupon in hand, we broke the seal so to speak. At first blush you’ve got a nice place, although it does seem to cater exclusively to douches and blue-hairs (of which we are neither) but the wine is acceptable, and overall things are going well. Jeff (can i call you Jeff? you ripped me off so I’m going to), here’s where things started go poorly… maybe it was the fact the at we walked up to the place as opposed to rolling up in our Jag like everyone else (we don’t have a jag that was humor.. a form of communication your staff doesn’t really comprehend), maybe it was telling the server we have a discount and she assumed we would be poor tippers (I always tip at least 20% on the full check amount), or maybe it was just hot back there in the kitchen (unlike three out of the four dishes we ordered) and you guys were having a bad night. But nothing excuses the geologic age of a wait we had to sit through from one course to the next (I’ll give you that presentation of the check was very snappy), the luke warm dough lumps you’re grandly calling gnocchi, or the comically small portions to which the only benefit was making me feel like a giant while eating them.

So here’s the thing Jeff, you’ve been there for a while and i can respect that in the cut-throat world of the restaurateur. And you’ve provided an anchor for the other, much preferred spots on the street like Zocalo. Your barman can make a mean drink, and desert was tasty. But so help me, if i ever find myself in a position of eating a full meal at your establishment ever again, i hope you won’t mind if I walk next door and get a plate of non-douchey, reasonably-sized, properly-seasoned tacos. I’m sure they won’t be arranged as artfully as your plates, but at least that way I won’t inconvenience your staff by having them do their jobs. 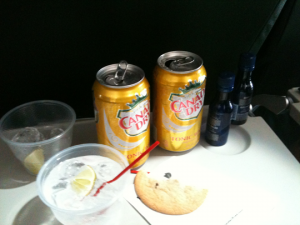 Ladies and lads, to the right is exhibit a on how to properly approach landing in a tropical storm, or as sane people would call it: 300 people crammed like sardines into a pressurized metal tube, while a lowest-bidder-union working tries to pilot you from a few miles above the planet’s comfortable surface, through tropical rain bands and gently plop you a on a narrow strip of concrete in a 5-star Texas thunderstorm. Have I mentioned how much i enjoy air travel?

When Greg Abbott actually sues a company in Texas, you know it’s got to be pretty bad.

In Texas City, an estimated 538,000 pounds of pollutants like benzene, sulfur dioxide and hydrogen sulfide leaked into the air during that period, though Carman believes the release may be “more than 10 times higher” than the number that BP reported to the Texas Commission on Environmental Quality. That’s because, he says, BP assumes that its flare met the 2 percent standard but has no record proving that it does. “BP has no real monitoring technology up on the flare,” he says. “They have no way to measure the actual emissions that did not get burned over the 40 days.”  (more…)

While we ponder more stringent immigration controls in the state, hows about we deport BP?

Following the release of Google and Verizon’s controversial proposal on managing Internet traffic, which comes less than a week after the FCC abandoned efforts at a hammering out a compromise, Tea Party groups have taken a strong stance on the issue of net neutrality.

Specifically, they’re against it. (more…)

I just…I can’t…words….rage….what the hell? Instead of the Government mandating an open web that is free of tiered-content restrictions based on provider, you’re going to let the ‘free’ market decide what content you should be allowed to access, based on a payment level? Or worse yet be served specific content at a different priority level, thus severely diminishing the open access to multiple sources/viewpoints? So, freedom of speach is cool, but if I’m poor and can’t afford access I only get served a specific…. oh wait, you guys hate poor people anyhow, so this actually works in your favor. I see what you did there.

This was my favorite bit.

The Internet has never been a regulated utility and we urge you to keep it that way by rejecting so-called “Net Neutrality” regulations on the Internet and the proposed Title II reclassification.

Right, cause all those root DNS servers, backbone connections, URL naming conventions -they all magically run themselves with no government intervention or regulation.

Of course he’s form Dallas. What an Asshat.

Language already in the Oil Pollution Act, established after the 1989 Exxon Valdez spill, eliminates the cap if the party responsible for a spill is found to have been grossly negligent or violated federal regulations governing the construction, safety or operation of an offshore rig such as the Deepwater Horizon. The rig was destroyed seven weeks ago in an explosion that killed 11 workers.

It’s “highly unlikely that the events of April 20 did not include one or more deviations from these codes,” Rachlinski told NPR. More…

So now it falls to BP to prove they were running a rig in accordance with the letter of the law, a rig that is currently sitting on the floor of the gulf, and was actually operated by another company, all with a price-tag sufficient to  bankrupt a multinational corporation.

Oh yeah, this will be settled quickly and fairly, I’m just sure of it.

BP owns the oil, and I guess any images of said oil?

Last week, a CBS TV crew was threatened with arrest when attempting to film an oil-covered beach. On Monday, Mother Jones published this firsthand account of one reporter’s repeated attempts to gain access to clean-up operations on oil-soaked beaches, and the telling response of local law enforcement. The latest instance of denied press access comes from Belle Chasse, La.-based Southern Seaplane Inc., which was scheduled to take a New Orleans Times-Picayune photographer for a flyover on Tuesday afternoon, and says it was denied permission once BP officials learned that a member of the press would be on board.