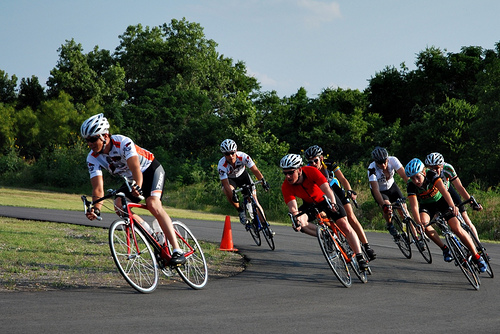 Texans are insane. It’s the heat and the good food. More specifically though, Austin cyclists are really insane. By some lucky quirk of geography and wind patterns, the weather in Austin is dry enough (a little more so than the eastern parts of the state) for us to pretend like we’re in a really hot, less mountainous version of Colorado. With no pine trees. And no snow.

People in this city are active, almost psychotically so. You want  to drive across downtown on saturday morning ? Forget about it, there’s a 5-10-15k going on. Probably most Sundays too. Something wrong with your car and you need to pull off to the side? Chances are peloton of road bikers are going to be asking you if you need a hand.

And all this while it’s 100 degrees out (and god knows how high with the heat index). I like to think it makes us tougher than our neighbors to the north who tend to stay inside or do non-stupid sports (frisbee golf? ) when the weather gets ridiculous. Or maybe we just work to hard – most of my motivation for getting on a bike after work has to do with dispersing some of the rage built up from sitting in an air-conditioned mausoleum all day and having photons unsympathetically shot at my face. An effort to dial the asshole meter back to a more tolerable four or five so my co-workers will be able to deal with me the next day.

I think we instinctively, biologically miss the old days, when working for a living meant physical effort, whether ti be tilling an existence out of the land, or earning a wage via the fabrication of something physical. Although I’m certain my Great-Great-Grandfather, a farmer from southern Oklahoma, would probably think I’m absolutely insane for waking up and riding a bike 25 miles for fun. Different times I guess. He probably wouldn’t get the time-investment involved with this website either (neither do I sometimes).

To cycling specifically, though,  Austin breeds some hard riders. Setting aside that one guy who won the Tour de France a few times, there are hard-core people out on the roads and trails – this dude for example who’s doing an eight day, 530 mile endurance race on the Colorado Trail (A race with camping sounds pretty fun – anybody?). There’s two weekly Crits that go on through out the summer, even when your tires are starting delaminate from the heat coming off the pavement. There’s also a Short Track Mountain bike race in the fall and a rumored Cross Season. There’s even just plain stupid people like us who do dumb shit like ride Lost Creek after work, when the average temperature is 98 degrees.

I was in a meeting recently, with some guys who know what they’re talking about and someone said that I was an average Austin cyclist – In this town, that’s one hell of a compliment.