When you read this, keep in mind I’m still a little upset about the demise of flannel shirts as an acceptable form of fashion. So really, I’m not the best, most credible source for a diatribe on the current state of peoples clothing. Just the same, will someone please, for-the-love-of-gawd explain to me what’s going on lately? First we have the obscenely over-sized sunglasses. On some of these models, you could use the lenses for a spare windshield on your car in an emergency. Why ? What is the purpose of shading your cheeks with tinted glass ? Wear sunscreen instead. Then there’s leg warmers and tights – ok people, chances are if it’s a trend from the 80’s it was a bad idea, especially if it was made popular by Saved by The Bell. Come on, we’re talking about the same decade that brought Don Johnson and Hulk Hogan to the forefront of cultural-consciousness. If we’re taking stylistic leads from that, we have some problems.

The final straw was Saturday night. We’re eating at Primize and this young lady rolls in to the restaurant in galoshes with a dizzying pattern of skulls on them. Like boots. Giant rubber boots. For rain. Or working in a slaughter house. And, no, it did not rain on Saturday. Nor does the restaurant require you to personally kill your food. 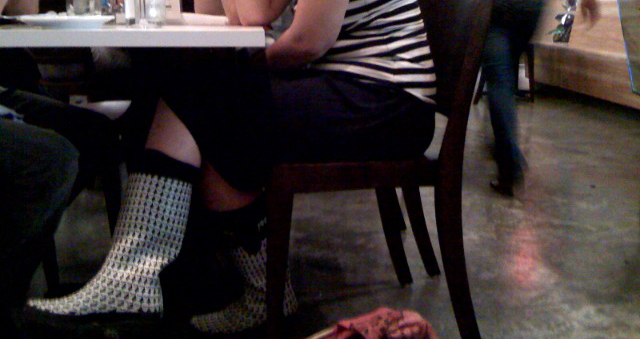 It’s always good when you can identify the exact point when all hope for the future is lost.