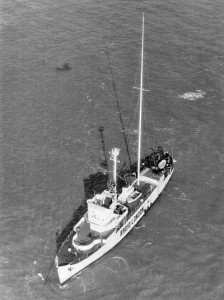 In 1964, two Texans bought a decommissioned WWII Minesweeper, outfitted it with a 50KW Radio Transmitter and parked it in the English channel in an effort to bust the BBC’s monopoly and bring the British Invasion back to Britain.

For all the noise they made in the U.S. you would never guess that the Rolling Stones and The Beatles had a hard time getting air time in England during the 60’s. In fact it wasn’t until a Texan from Midland started broadcasting from an old Mine Sweeper in the English Channel that the British Invasion came home.

The majority of programs were presented live from a studio in the hold. The ship’s metal bulkheads presented problems with acoustics and soundproofing that were originally solved by lining the walls with mattresses from the crew’s bunk beds, which meant none of them could sleep during the day.

Listen to the superb Teaxs Music Matters piece on Radio London or read more on Wikipedia.