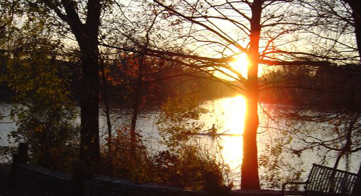 I recently decided that I didn’t have enough hobbies and as I live pretty close to the lake now, rowing would make a nice compliment to the other stuff I do. I’ve thought it looked like a good time especially in the summer when running gets pretty awful and bike rides are curtailed to after dark madness to dodge the heat.

We had the second of four lessons today, which basically consisted of a bitchin-80’s-style safety video and a recap of what we learned before (don’t drown, don’t run into things, try to go straight – I got two out of three right). Anyhow mechanics of rowing aside, this is quite a zen thing. It’s a pretty cool thing to strike out on the lake at sunset and crank out few miles, soaking up the relative coolness of the lake.

You also run into a lot of lake-people, some hard core (you know who you are), some not so hard core (stoned hippies, who couldn’t put the J they were smoking down long enough to turn their freakin canoe out of my way) and some just damn funny, very Austin types. I was coming back to the dock today and this big guy in a sit on top Kayak kind of meandered into my path. In these rowing shells, they got fast and straight really well, but they don’t exactly corner on a dime. On Town Lake it’s kind of like driving a super tanker in a bathtub.

So I drop the oars in and slow myself down in order to figure out where he’s going so we don’t reenact the Exxon Valdez disaster. With the boat stopped I can hear singing. It takes few seconds but coming form a 300lb dude, in a lil-bitty kayak is the Beatles Yellow Submarine in damn-near perfect pitch. And not softly either, he was going for it with gusto, as they say. I reset my aim on the dock and cruise by the guy, singing along with him. I can only hope that somewhere George Harrison was watching.