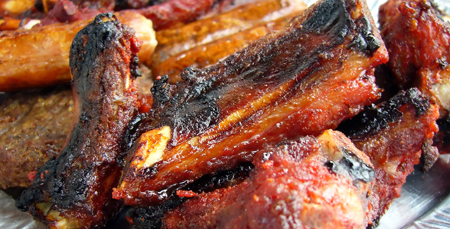 South Austin is one of those special places in the world. If you’ve never been here you probably don’t understand. Take some old hippies, some new hippies, some Mexican culture, a good music scene that runs the gamut between country to punk, mix them all up with some great food to be found in some fantastically crusty dives, and you’ve got a close approximation.

Artz Rib House is a great example. Serious BBQ, live music, and one of the top five sketchiest bathrooms on South Lamar. Last night they sat our party of four at at six-top in the main room where the music was happening. Soon enough our spare seats were taken by two Old-Austin-Type-Folks. These are the ones who’ve been here since the mid 70’s when there were more prostitutes than musicians and frat boys on 6th street. They’ve been the music scene and presumably they all personally knew Stevie Ray Vaughn.

So J.B. and MariBeth. They plop down at our table, absolutely taken aback that the hostess would try and seat them anywhere other than directly in front of the weee stage, so would we mind sharing our table ? He’s got the long grey hair and leather motorcycle vest thing going on. Dimes to Dollars he’s seen some interesting days in this town and others. A musician, a pianist classically trained. They know and introduce us to members of the band. They know Art, proprietor, slinger of excellent BBQ and sides and introduce us. Orbits and trajectories that would have remained mutually exclusive are smashed together by the inexorable force of gravity that is South Austin. That’s why we love it here.

At the end of dinner, brow perspiring from the excessive meal, I scrape the last resisting remnant of the baked potato through the detritus of a half rack of baby back ribs and sausage. J.B. regards the wreckage of my plate, finished in record time and says, “Son, I’m proud to know you.”