The American Roadtrip. I’m not sure if other countries have this – it seems to me that Europe is too close together, and to interconnected with highly sensible trains, and the rest of the world can’t afford to be that extravagant. Maybe in China, but I’m not Chinese so I don’t know.

Regardless, the summer tradition – load the car and head west, an unconscious tribute to the days of taming a wild continent (genocide of the natives is kind of over looked for the sake of the kids here).  The drive to New Mexico is something else. It’s 12 hours, 34 minutes and 24 second from my parking spot to downtown Red River, nine hours of which is spent getting out of Texas. It’s a big damn state folks. We opted for the previously mentioned stopover in Amarillo, complete with Jehovah’s Witnesses, and angry English people. Amarillo has always been best described as “rode hard, put up wet,” a phrase that nicely captures its western cowboy roots and its utter craptasticness, although given the number of spanking new wind turbines up there (it looks like a strange forest), there could be something bright on the horizon for them.

Another fine thing about the road rip is the early morning roll out. Given Amarillo’s previously mentioned status, there’s no reason to hang out for the continental breakfast. 5 a.m. finds us on the road, watching a grey sunrise of the panhandle. Then it’s across the state line and up the flat plains of the Canadian river valley, screaming across pavement that has its origins in the Nixon administration. 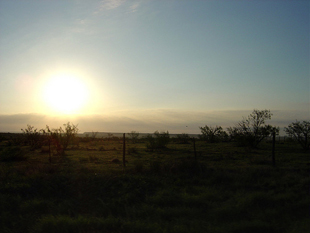 This is the West as I like to see it – empty. You can drive for five hour and maybe pass three people on the road (who will of course give the requisite two-fingered steering wheel wave). Then, in Springer, you catch your first glimpse of the mountains – the distant purple lumps on the horizon, little teasers as if the guys who built these roads knew you’d been driving through the panhandle with nothing but flat cornfields and a game of highway alphabet that is indefinitely stuck on ‘x.’

Finally, your brain thoroughly unplugged after 11 hours from the driving motions of 20 mile stretches of flat, straight highway, you hit the first canyons in Cimarron, and from there you’re rewarded by 45 minutes of downshifting, hair-pin turns, mountain passes, gorgeous scenery as you wind your way up to 10,000 feet.

In short, we made it. 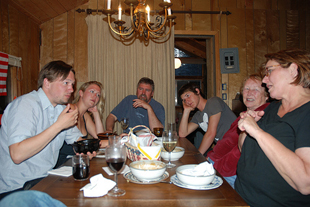 The first few days in Red River are always a bit of a blur due to that special form of jet lag that comes from a lot of driving. The best part, was having my family in one place, we don’t get to do that much these days as we’re kind of smeared across different counties, states and time zones.

There was also Leon Russell at the Motherlode, a bar that my Mom used to sneak into when she was 16 and dating Ray Wylie Hubbard. Leon, is quite honestly, old as hell, and I swear for the entire hour and thirty minute set he didn’t move form the shoulders up. But, that sunofabitch can play some music – no breaks, no stage banter, just music. Good music. And a few drinks too.

And the next day, the hangover from hell.

There’s nothing quite, like being hung-over at 10,000 feet. I felt as if the Subaru had popped out of gear and rolled over my head while I was passed out somewhere in the driveway, and as this is not normally a site of graphic nature, I won’t detail the intestinal ailments that also followed. 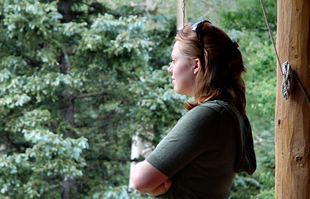 The Cabin was fun though, with the family, my cousin Hiram brought all his friends and their various instruments – enough to form at least three back up bands for Sufjan Stevens. There was also enough food to fill out a WWII aircraft carrier.  I got to show Liz, what basically amounts to my second childhood home, and play in woods. My family has been coming to this particular spot on the globe for going on 40 years  – It’s the family ranch, compound and homestead. In event of nuclear war or zombie attack it would be the default location.

We then whisked off to Santa Fe to check it out – with Tappas on Canyon Road, drinks on the roof of the Coyote Café, and the serenading tones of the Ladies of the Xylophone – Santa Fe Chapter (not really their name, but it fits) on the square in the middle of town. Santa Fe is one of those places you can sense you could be extremely happy if you knew how to get there. Then sadly, we put Liz on a plane in ABQ so she could get back to the real world, jobs and 100 degree Texas heat.

I had other, non-realworld-realted plans though, but this is getting a bit long, and I should probably do that whole job thing. Check back for the rest of the highlights including Beating the weather Gods, the South boundary Trail, and solid, sound advice on why eating something called the Fatty Burrito, before a 15 mile bike ride is truly bad plan.