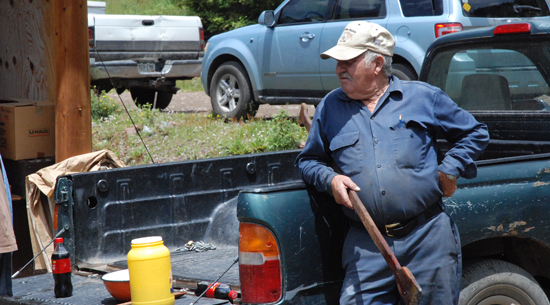 Joe Cisneros is the kind of guy they should make movies about, and actually they already have. The patron saint of Questa, New Mexico, he fought the mining companies that polluted the drinking water and took a bullet in his arm, among other abuses, for his trouble. Among his most recent efforts for his home town was his procurement of a grant to buy hyper-efficient wood burning stoves for the less than wealthy in his village, to fight off the New Mexico winter. In addition to being on the local school board he also has the distinction of being head contractor on every construction job at our cabin, with the few exceptions being, in his words, “fucking nightmares, man.” He’s about two feet shorter than me, and can curse at me fluently in a couple different languages (especially when i do something dumb like leave the 4-wheeler on all night).

Joe works a small crew, I think so he can have an equal opportunity to boss everyone around. It’s interesting to watch my Dad, whose spent the last six month meticulously hand-drawing plans for the current renovation explain a part of the project to Joe – he stands there for a moment, ponders the particulars, and says “Ok, Steve, here’s what we’re going to do…” and proceeds to embark on some wild-arsed solution that nominally involves yanking a tree out of the forest and milling it into some incredibly beautiful beam, an act I’m pretty sure violates more than few local and state ordinances, and stretches some provisions of the Treaty of Guadalupe Hildago to the point where we should now technically be at war with Mexico. He bounces back and forth between Spanish and English, but thankfully since most of his Spanish is cursing, I can catch the drift of what he’s saying pretty easily. With sentiments like “What the hell are you doing standing there with your arms crossed? I will sew those goddamn hands to your armpits if you don’t get over here,” or “What the goddamn hell do you think this is a vacation? Get you asses up here and clean this shit up,” it’s hard to miss the meaning, and yet somehow it’s all good natured.

Joe rounds out his crew with, Ivan, the classic New Mexican Chicano, Larry the classic New Mexican Gringo gone native (he has three white buffalo in his back yard, and a gray pony tail), and for this week at least, myself, my dad, my cousin Hiram and four of his buddies from school. We’ve spent the last few days demoing walls, building walls, tearing out wiring , installing new wiring and most of all, sorting scrap wood (a byproduct of the 40-year construction project that this place has been – you you really have a metric crap-ton of wood. There are 2×4’s here that saw Kennedy in office. 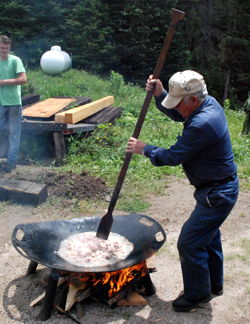 Today, Joe made chicharrones for the crew and the attending family, which seems to be more about the process than the end result. Here’s the method as far as i can tell – use 4′ cast-iron wok with legs. Build a fire under said wok using leftover 2×4’s and ample amounts of gasoline. After it’s appropriately heated, dump about two cups of lard on the hot surface and about two pounds of raw pork fat. Stir with a giant paddle until appropriately blackened. In a a sort of drive-by maneuver, pour coca-cola onto said mixture, hopefully without getting third degree bunrs as the whole concoction over flows. Then careful extinguish the ensuing grease fire. Serve with tortillas, green chillies and ample intestinal fortitude.

I haven’t thought about work in quite a few days, but I will say that, this is the kind of thing I work for – to be able to come up here and do a good days work, and sleep in a beautiful place. It’s a bit odd that I have to sit in front of computer for 40 hours a week to be able to come up here and preform the manual labor that I really enjoy, but I guess that’s the fucked up way of the world, and the strange tuning of my character that makes me enjoy things like drilling holes in studs, and destroying sheetrock.

Joe, Larry and Ivan – watching them work together is better than TV really. The pasta-bowl inspired wiring of the house has continued to pose problem fo us moving forward, leading to a general consensus to scrap most of it, pull what we can and get on with the thing. Running new mains without trashing any more sheetrock led to a delicate operation of inserting section of pipe into holes through the wall leading to plethora of inappropriate jokes between Larry and Joe, with Ivan just standing in the background laughing. Ivan’s a funny dude – the quietest of the bunch, normally from Albuquerque he’s working with Joe while up here taking care of his mother who’s been ill. As the day was finishing up we were talking about my normal existence and his kids who live in Austin. “Oh man,”he said ” my boys are great kids, they tried to get me to move down to Texas, even tried to buy me a house down there in Austin. You aint getting me out of here. New Mexico’s a poor damn state, but look at all this we have – you ain’t getting me out of these mountains.”

more pictures | view the latest on the cabin renovation