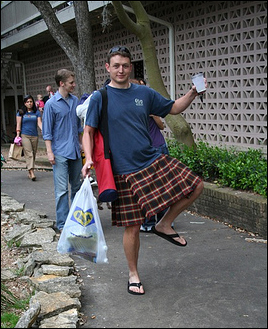 As of Saturday night, I am the proud owner of what I can hope is Austin’s first Sport Kilt. A sport Kilt is apparently a traditional Scottish kilt, with a little less fabric and a modern closure system, in this case velcro.

Before we start deriding me as a scot-poser-braveheart-wannabe, let me start by saying that while that movie was good, Mel Gibson has turned out to be something of a chump in his later years and has really given some us of the semi-scotch persuasion a hard go if it. Indeed, there were even a couple of ‘Freeeeeedom!’ yells on Saturday (inaugural kilt day) … come on guys, that’s so 1996. Anyway the round-about point I’m making is that while Treichler is Swiss, if you bounce a little farther up the family tree you run into the McClain branch of the tree. That’s right, I am distantly related to John McClain from Die Hard, who’s saved the world from terrorists way more times than President Bush has.

Now sadly, according To Seamus at Sportkilt.com – ‘…the McClain Tartan, it’s a quite ugly.’ So on his advice my parents wisely choose the ‘Irish Revenge tartan.’ I’m not sure what I’m being vengeful about, but when ever I put it on, I clearly am ready to kick some Irish ass. I mean, just look at the picture (although I have no idea how I got to Ikea, what I bought or when it will arrive (actually that’s pretty normal for me and that store)).

Irregardless, good times were had with friends and family – a nice way to bring in a new decade. Oh, and you you’re getting old when there’s more pictures of your friend’s kid than anybody else at your birthday party.