Lieberman has decided, in his infinite fuckheadedness, that any public option and any expansion of Medicare — the two last vestiges of hope for an even slightly helpful bill — is too much. Yesterday he went on CBS’ Face The Nation and said he couldn’t vote for the bill in its current form. More…

Well, it’s becoming clearer that this is not going to happen. I’m healthy 30-year-old who, should I change jobs, would not be able to afford regular health care coverage out-of-pocket. The premiums would be more than my rent and my car payment combined. Should serious illness our injury strike me, my only recourse would be personal bankruptcy. In this-day and age, living amongst the vast wealth of this country, that’s a damn crime. The Republican party ought to (as usual) be ashamed of itself – they’re trying to break the President politically over an issue that effects the health and well-being of millions of their fellow citizens.

There’s a point when living in a funky but older apartment complex ceases to be charming. That point for me was this morning, either when the rusty, hot water cut-off valve under my bathroom sink broke off in my hand, shooting 100psi jet of scalding water into my chest (see fig a). Or, it could have been when I was running barefoot down Enfield in 30 degree weather looking for the cut-off valve for the whole complex, thereby robbing my neighbors of their morning showers but also stemming the wave of water cascading out of the bathroom. 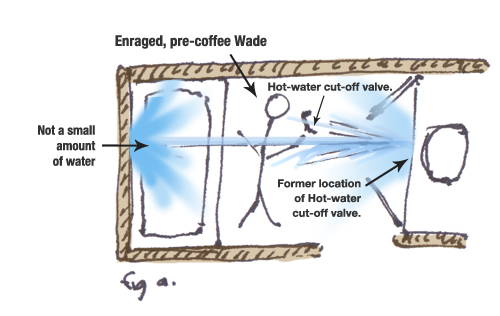 I’ve decided that my family as a whole needs to start honoring, or doing whatever it is you do to the Patron saint of plumbers Vincent Ferrer. We seem to be cursed by faulty or freezing pipes on a more the regular basis than most folks. That, or I just do a shitty job picking out apartments. Regardless, please pardon my brevity as I have to go put all my belongings up on blocks now.

Ok, so the amendment blocking abortion funding was stripped out for time being, but….

As written, the Senate health care bill allows taxpayer dollars, directly and indirectly, to pay for insurance plans that cover abortion,” Nelson said in a statement. “Most Nebraskans, and Americans, do not favor using public funds to cover abortion and as a result this bill shouldn’t open the door to do so.”

(Senator) Hatch argued Tuesday that the Senate proposal as originally written provides a loophole for the use of federal money to subsidize health insurance that would cover abortion. “Taxpayers should not be called upon to pay for abortion,” Hatch said.

Cool, so Senators, since you’re for allowing everybody to opt-out of  paying for anything they don’t agree with (like the aforementioned legal medical procedure),  I would like a refund for the portion of my taxes that you you used for that illegal The Iraq war you authorized back in 2002. If you need to wait till after you guys collect taxes in April, that’s cool, I know you’re a little short on cash of late.

While we’re at it, I’d also like a refund for what you spent on FEMA during hurricanes Katrina and Rita, on the Eastern European missile shield program, the secret CIA prisons, Dick Cheney’s man-sized safe and on those fancy presidential helicopters that your party signed off on. I found all these things (just to name a few) morally objectionable, and I really don’t feel comfortable with you using my tax dollars for them. Just shoot me an email and I’ll get you my Paypal info. Appreciate it.

The unfortunate prominence of an ill-advised trend in young adult fiction and broader American pop-culture (this retarded vampire thing) continues, prompting Wesley Snipes to get back into method-acting, reprising his role as Blade.

I will infiltrate the major networks and destroy the casts from next season’s crop of vampire shows before they even make it to the airwaves. I will do so in the middle of an impressive series of flips and then I will put on my sunglasses, even though it will most likely be dark outside.

This November marks ten years since the stack collapsed on the polo fields, and also would’ve marked the 100th year of the on campus bonfire tradition. Texas Monthly has put together a helluva oral history from former Ags, including the previously mentioned remarks by our governor, which given the full article, seem incredibly out-of-touch and insenstive.

I will never forget Tim Kerlee. He was up on stack, trapped under a pile of logs, but every time one of us approached him to help, he would turn us away. He would say, “I can see so-and-so over there. Go help him. He needs the help. Don’t worry about me.”

From a seventeen-year-old, no less. Given the time frame, and the number of students who’ve passed through the school since that day it’s pretty easy to minimize the loss that day. Some of my cousins and friends, who graduated four or five years after me have talked about the off-campus student bonfire as something awesome that should return to the school in an official capacity.  To me it’s insulting. No I didn’t go to cut, no I didn’t know any of these kids, but I do know that none of them got to graduate, get married or celebrate the birth of a child. Those of us who were there, and remember seeing fellow students place their senior boots and Aggie rings at the impromptu memorial in front of the academic building, remember the wreaths and crosses pined to chairs in classrooms where the twelve students had sat, most of them would tell you that sometimes it’s best to let something fade away.

What’s really masterful about this piece is, through the words of the interviewees, they’ve given an outsider a bit of a glimpse into A&M’s true identity: A giant, well-intentioned contradiction.

Blogging is dead. This shouldn’t come as a surprise really – it only took three years, but with no election, 90% of the blogosphere has finally run out of shit to complain about. When folks at my office are-just-oh-gosh, super-excited-about-our-new-blog, you can be sure that a social media format is deader than disco, Lincoln, yard darts, or maybe some odd combination of the three. Henceforth, this site will no longer be a known as a blog (if it ever was), but as a non-blog place on the web for me to post cool stuff. Apparently there’s a difference. Who knows maybe I’ll start a Zine.  This is all no excuse however, for the decidedly low traffic on the site of late, but damn, we’ve been busy. In the past three months, we’ve either launched or heavily tweaked three separate websites, and been hard at work on quite a  few more. You can take a look at some of theses in the projects section of the navigation if you are truly bored, but this also explains the heavy reliance on Twitter of late. I’d really like to think Twitter is making us all smarter by forcing people to be witty in a brief, 140 characters, but the while the latter is strictly enforced by coding, the founders of twitter have yet to be able to force people to be witty, making 90% of the twit-verse pure bacon-related drivel. Seriously I like bacon but the current obsession if over the line. At some point, someone, somewhere is going to build a social platform with meaningful content, but I’ve yet to see it.

And while we’re talking platforms, I’d like to take a moment to give a big, fat middle finger to Adobe Systems. The quick and certain response to this (by one Matthew Badowski in particular) will certainly be, why don’t you just use an open-source solution. I’ve been using Photoshop, and InDesign (it’s fore runner PageMaker) since 1994. Certain habits are hard to break, and honestly it’s a great damn system. When it works. And here in lies the rub. Truly appalling customer service aside, the recent releases (when paired with the current OS X upgrades) are so unstable as to cause me to loose work, a lot of work, and nothing pisses me off more than someone wasting my time. You guys charge anywhere from $600-1000 for you upgrades – would you at least make sure the damn thing won’t crash every time i save a file, before greedily swiping my card? It’s almost becoming a point of honor for me to go procure the next three versions of your software via nefarious channels in order to make up the difference.

But hey, it’s Friday, the weather is supposed to be fantastic for the first time in 6 months, OU is playing (and hopefully beating) Texas this weekend,  so the nation of wade is going to unplug and go get on a bike – something tells me that all this nonsense will still be available to worry about on Monday.

Listen up people, we are going to make this happen.

A match between two opponents consists of up to eleven alternating rounds of boxing and chess sessions, starting with a four-minute chess round followed by three minutes of boxing and so on. Between rounds there is a one minute pause, during which competitors change their gear. The form of chess played is speed chess in which each competitor has a total of twelve minutes for the whole game. Competitors may win by knockout, checkmate, a judge’s decision or if their opponent’s twelve minutes of chess time elapses.

More posts and photos from the trip will be forthcoming after i reclaim the surface of my desk from the territorial incursions made by my various jobs during my absence.

I love Austin, but this is just getting out of hand. The only recourse I’ve found is sitting in Barton Springs for 6 hours a day which leaves little time for jobs and such.

On Friday an inspiringly epic amount of worrisome shit was occurring in my life, all seemingly at once, most which I had no direct control over. Among these, hands-down the most dangerous and grey-hair inducing was driving in Houston.

You forget how it is, if you haven’t done it in a while. But after the second city bus almost killed me and a mom with four kids in the back of her minivan took some pot-shots at me with her nine (for not going fast enough on the on ramp), I decided it was time to dust off the old skills, and get Mad Max on this thing. For those who haven’t had the pleasure, here’s a quick primer